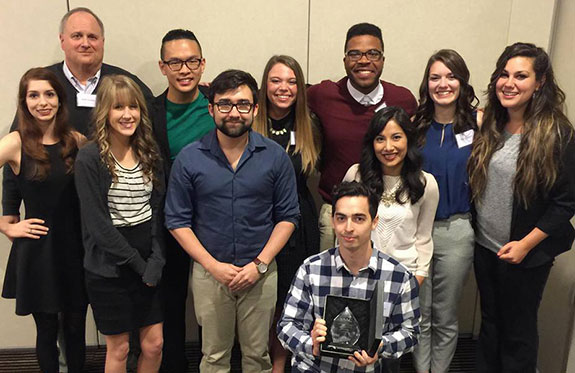 “It is a huge honor, and I am awestruck to have won,” Clinebell, a double major in Journalism and Advertising and Public Relations, said. “After working all year on this campaign, there was such a huge sense of accomplishment when we presented our ideas to the judges.”

The competition judged teams on a number of criteria, including the design, research, budgeting, and content of a plans book that was submitted before the event itself. In Raleigh, the teams presented their pitches — a yearlong, dual-tactic campaign for Snapple, which sponsored the competition — to a board of judges, which included an executive from Snapple. Teams were scored on their campaign strategy, presentation skills, professionalism, and more.

Clinebell said that following the presentation the team was grilled with questions by the judges.

“We were able to convey our passion and knowledge in a professional, eloquent way that showed that we understood who Snapple was and that we knew what we were talking about.”

“I’m proud of the dedication and creativity of our student team,” Schwartz said. “Our Digital Media & Communication Arts program is focused on building these kinds of career skills in our students.”

As someone who wants to work in marketing or advertising, Clinebell said she appreciated the experience she gained from her year on the team. She said the team has grown into a family of sorts as they have worked together.

“I learned how to fight through moments of creative drought and how to reign it in when we had too many ideas,” she said. “I learned the importance of teamwork and how vital a positive attitude is, no matter how hard the task is.”