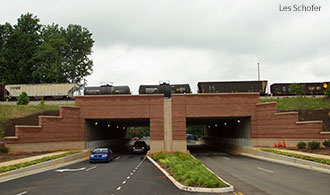 The recently completed vehicular tunnel that runs under the Norfolk Southern railroad tracks on Liberty University’s western boarder was recognized as one of the best projects of the year by Engineering News-Record (ENR) MidAtlantic, a magazine and website for construction industry professionals.

The vehicular tunnel, which opened in May, was tabbed the best Small Project (under $10 million) in the MidAtlantic region, consisting of Delaware, Maryland, Pennsylvania, Virginia, West Virginia, and the District of Columbia. The tunnel, featuring four lanes (two each way) and pedestrian walkways, was designed and managed by Brierley Associates.

This recognition will be featured in the December issue of ENR MidAtlantic and makes the project eligible for the Best Overall Project, which will be named at a conference on Dec. 12 in Baltimore. The tunnel is automatically entered into ENR’s national competition, in which all top regional projects are judged to determine the “Best of the Best” selections.

The digging method used for the project was the first of its kind in North America. It involved pulling two jacked concrete boxes, each standing 26 feet tall and weighing 4.2 million pounds, through the earth with six motors and more than 160 cables. It also marked the first time the Norfolk Southern Railway had allowed concrete boxes that large to be pulled under a live, active, main rail.

Because of the unique tunneling method, the project has garnered interest in the industry and has been covered by the American Society of Civil Engineers and Tunnel Business Magazine. (Read more about the project in the Liberty Journal.)

The vehicular tunnel has greatly improved traffic flow onto campus from Wards Road, the busiest retail corridor in the region, and allowed the university to eliminate a dangerous at-grade railway crossing.