Hollywood director talks to students, screens ‘Heaven is for Real’ 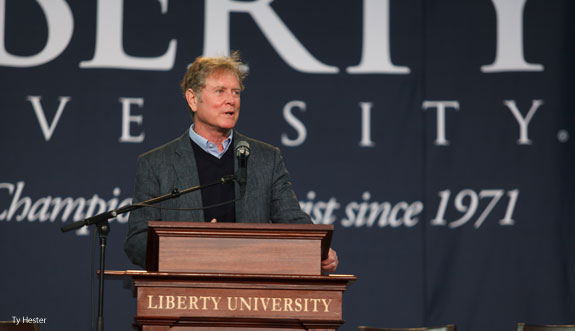 Screenwriter, director, and producer Randall Wallace visited Lynchburg on Wednesday to speak in Liberty University’s Convocation and to screen his new film, “Heaven is for Real,” based on the best-selling novel of the same name.

Todd Burpo, a Nebraska pastor who wrote about his son Colton’s near-death experience at age 3, accompanied Wallace to Lynchburg. After Convocation, a campus tour, and meeting with students and staff at Liberty’s Cinematic Arts Center, Wallace and Burpo were scheduled to only show the film to members of Liberty’s administration at Regal Ridge Ridge Stadium 14. But students were so enthused with Wallace’s Convocation message (where they also saw a trailer for the film), that President Jerry Falwell, Jr. invited all students. Sony Pictures bought 1,100 seats, and the film was shown on five screens.

Wallace said it was the largest screening so far and the only one to be held at a university. The film releases to the public nationwide on April 16.

Wallace, who gave the Commencement address at Liberty in 2011, said he still calls Lynchburg home, having spent much of his childhood here. He graduated from E.C. Glass High School and still has family living in the area.

Wallace is widely known for writing the screenplays for “Braveheart” and “Pearl Harbor” and directing Disney’s “Secretariat.” He also wrote, directed, and produced “We Were Soldiers” and “The Man in the Iron Mask.”

At Convocation, Falwell introduced Wallace as a “consummate storyteller” who has become a close friend of his family.

Wallace shared with students his experience filming “Braveheart” in Ireland and seeing for the first time the words he had written come to life. During the filming of one of the movie’s most memorable scenes, William Wallace (played by Mel Gibson), stormed onto the battlefield and gave a speech that rallied the Scottish army (more than 3,000 actors) so much so that they veered from the original script and all became overly excited at once.

He said he realized then that the words he had written had caused them to believe it could really happen — even on a movie set.

“It’s the idea that they felt it, they believed it; they knew the weapons were rubber, they knew the costumes were just costumes, the cameras were just cameras filming a performance, but something deeper made it real,” Wallace said.

He continued: “My job is to inspire others, and I can’t do it if I’m not inspired myself. You are here to be leaders,” he told students. “What will you do with that leadership? I believe the only way to be a true leader is to be a follower of Jesus.”

Though a break from the action-packed movies he has directed in the past, Wallace said the story behind “Heaven is for Real” instantly intrigued him.

“I decided a long time ago that I didn’t want to do anything else with my career, with my life as long as I have it, except do stories I believed in,” he said.

Wallace and Burpo participated in a question-and-answer session with Falwell and Johnnie Moore, senior vice president of communications, at the end of Convocation. They talked about society’s recent fascination with the mystery of Heaven.

“I hope it puts our country back on track,” Burpo said. “With our story, everyone recognizes you’re not going to get more pure, or more innocent, or more accurate of a witness than a child. People can’t explain away what he saw by the drugs and chemicals creating memories that he never had. He either experienced this or he didn’t, and if he did, Heavenly answers are the only answers you’re going to come up with.”

In an interview following the afternoon screening, Wallace said he was moved by the comments from Liberty students who approached him afterward.

“In making this (film) we thought the appeal of the movie would either be for the very young or for adults who had children already,” he said. “It was great to see how much (the students’) hearts were open; they were emotionally caught up with the story.”

Burpo said the scariest decision in his life was deciding to work with Hollywood on the project. He prayed for three years, and about a year ago, he felt God calling him to the challenge and he knew it would have a huge impact like the book has.

“The movie never hides Jesus; it doesn’t hide the struggle of faith … this movie is going to put all those honest issues on the table in front of you to sit down and talk to someone with in a way that isn’t compromising, but it’s not offensive either,” Burpo said. “I think there’s going to be incredible conversations about God because of this. I really feel that this movie, like the book, is going to have some staying power.”

Burpo said many students also came up to him afterward, telling him they wanted to bring family members and friends to see the film.

“I definitely want to tell other people to see it,” she said. “It was really inspirational, the whole concept of having a childlike faith.”

Phillips said she was grateful to Liberty and Sony for the chance to hear from a Hollywood director and view the film.

“It’s really unique to Liberty,” she said. “I feel really blessed to get to go to a school where we have these different opportunities.”