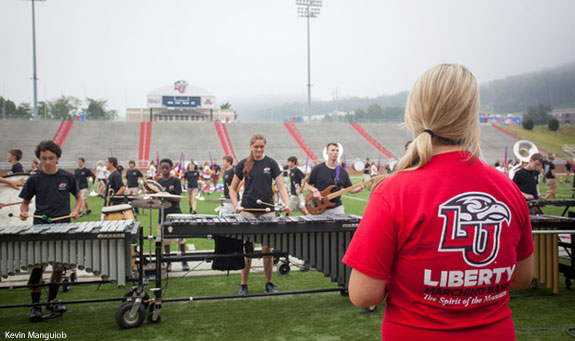 The Liberty University Marching Band, “The Spirit of the Mountain,” welcomed 16 local high school bands on to their turf all day Saturday, Sept. 21, for the Blue Ridge Festival of Bands.

Liberty’s marching band co-hosted the event with Brookville High School. Brookville had hosted this event in the past to raise funds for their own program, but Liberty assisted the school this year. The bands, primarily from high schools in the Central Virginia area, gathered at Williams Stadium from 8:30 a.m. until 9:30 p.m.

“We are really enjoying this opportunity to partner with Brookville High School. (The festival) gives us the chance to be a little bit more involved with the community,” said Stephen Kerr, band director. “We want other band members at (local) high schools to be able to visit us and have a positive experience.”

The high school students were able to visit Liberty’s campus and get a taste of the marching band program, which is part of the Center for Music & the Performing Arts.

“One of the really great things about our band program is that we’ve been so blessed to be able to develop it to the size and prestige that it is now,” Kerr said. “With that prestige, we also recognize the responsibility we have of representing Liberty University.”

The Spirit of the Mountain has appeared in the Macy's Thanksgiving Day Parade, at the New York Giants Stadium in the Meadowlands, and at colleges and universities throughout the Eastern United States. For more information, visit www.Liberty.edu/Band.