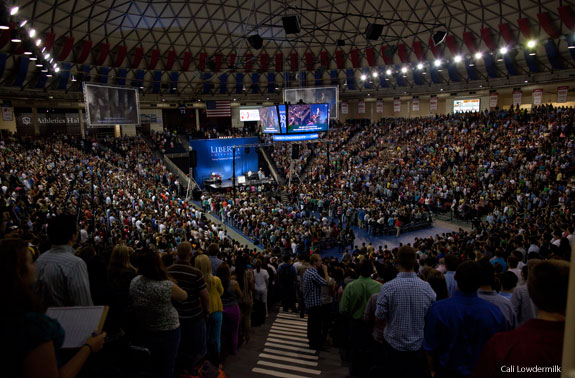 Students gathered in the Vines Center at Liberty University for the first Convocation of the 2012-13 academic year on Wednesday, Aug. 22.

Jerry Falwell, Jr., president and chancellor, addressed the student body, welcoming them and encouraging them to never quit, citing the admonition his father, Dr. Jerry Falwell, Sr., traditionally preached at the start of the school year.

Falwell, Jr. shared his excitement for Liberty’s campus transformation, which is currently under way, including new intramural fields, the Jerry Falwell Library, a new baseball stadium, and a new medical school. But he explained that Liberty is more than that.

“It’s not programs, or facilities, or academics that will change our life here at Liberty,” Falwell, Jr. said. “It’s your peers, the Christian commitment of this student body, your faculty, the staff here that will really change your lives.”

Falwell, Jr. often addresses students during Convocation, which is held three times a week and is North America’s largest weekly gathering of Christian students. On Wednesday he said Convocation features speakers from all walks of life who are leaders in their field and whom students can look to and emulate some of their qualities.

He then announced that Donald Trump will be a featured speaker at Convocation on Sept. 24. This will be the first appearance at the university for the billionaire real estate mogul and television personality.

Liberty also announced today that Louie Giglio will speak at Convocation on Nov. 2. Giglio is a speaker, author, the pastor of Passion City Church in Atlanta, Ga., and the founder of the Passion Movement, which seeks to inspire university-aged people around the world to live for what matters most.

Falwell, Jr. said more “surprise” guest speakers are to be announced at a later date. (For a tentative schedule, go to Liberty’s Convocation page.)

He then introduced Dr. Elmer Towns, co-founder of Liberty and dean of Liberty Baptist Theological Seminary and Liberty University School of Religion, as the day’s Convocation speaker (also a Liberty tradition at the start of every school year).

“We are only starting,” he said. “We are going to go on to do many wonderful things.”

He explained that he has “walked among giants” and called the students to do the same. When you walk among giants you learn vision, great faith, evangelism, work habits, and to give back, he said.

“Liberty produces giants,” Towns said. “Give your heart to a giant to learn the vision of a giant. Here at Liberty, we want to stretch your vision to believe God for great things.”

Achieving the vision is hard work, and it is smart work, Towns explained. He challenged the students to learn as much as they can this year and to remember the greatest thing they can learn is to fit into God’s plan for their lives.