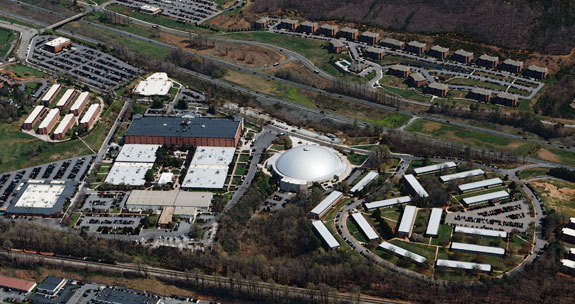 CAMPUS IN THE FUTURE 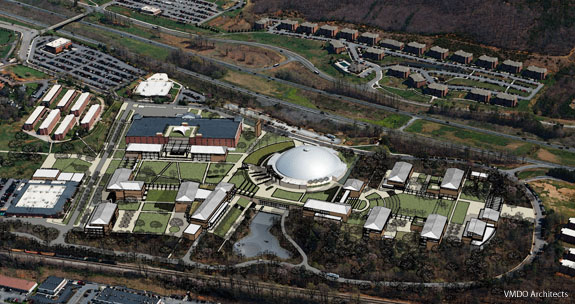 The Rev. Jerry Falwell, Sr. cast a vision more than 40 years ago to turn farmland at the edge of the city into an institution of higher learning where students would be trained to become Champions for Christ in their chosen fields. That farmland slowly took the shape of a small college campus, with a few residence halls, a dining hall and a main academic building. Forty years later, more than 58,000 people can call themselves Liberty graduates and the campus is a far cry from “a small Bible college,” as 12,275 students will make Liberty University their home-away-from-home this fall.

Under the leadership of Chancellor Jerry Falwell, Jr., another vision has been cast, built on the same foundation laid by his father decades before. That vision includes a massive transformation of the campus landscape that will impact all areas of the education experience for many more champions for Christ. The $120 million project is planned to be completed in the next five years, with the renovation and additions of several academic buildings and a freestanding library, creating 500,000 square feet of new academic space. Liberty’s oldest dorms will be replaced by multi-story buildings, allowing the campus to expand to 20,000 students, said Chancellor Jerry Falwell, Jr.

“Many of liberty’s oldest academic and residential structures make poor use of space. They are mainly single-story structures that eat up huge chunks of campus,” he said.

Most of those buildings were constructed in the late 1970s when Liberty was forced to vacate the old Brookville High School (where Jerry Falwell, Sr. attended high school), which it was renting from Campbell County for classroom space. The city of Lynchburg annexed the school and demolished it, building Heritage High School in its space.

“The buildings were not meant to be permanent structures on campus but they have served Liberty well for 34 years,” Falwell said.

Liberty hired VMDO, the same architectural firm that designed the John Paul Jones arena in Charlottesville, to create a unified architectural look and feel for campus.

“The hope and plan from the beginning was for Liberty University’s campus to showcase the Jeffersonian architecture that was born in this part of the country. Liberty was named for the principles espoused by our founding fathers,” Falwell said.

He added that Thomas Jefferson may have lived in Charlottesville but preferred the Lynchburg region because of the beautiful mountain views and the successful commercial enterprises in the city of Lynchburg, so he built his summer home here.

Jeffersonian architecture was a favorite of Falwell, Sr., too. The main sanctuary of the old Thomas Road Baptist Church was built from architectural plans drawn by Thomas Jefferson for a church that was never built in Jefferson’s day.

With Liberty on strong financial footing and with interest rates and construction costs at historical lows, Falwell said now is the time to take on the massive project.

The construction is being financed by the sale of $120 million in tax-exempt education facilities bonds in December 2010. Liberty’s credit was rated AA by Standard & Poor’s, which places Liberty among the nation’s top 78 S&P-rated universities and colleges for financial strength.

The project began this summer with the renovation of the fourth floor of DeMoss Hall, space that has never been occupied. It will be the temporary home for all the departments now housed in the older buildings that will be demolished.

With more classroom space in DeMoss Hall and more academic buildings planned for the future, Liberty’s main campus will essentially become a pedestrian campus, with students being able to walk to most of their classes. Some classes were being held in Liberty’s Green Hall (formerly called Campus North) and students had to use on-campus bus transportation, provided by Greater Lynchburg Transit Company (GLTC). With the new locations of classes, the school has been able to decrease the number of routes, saving on costs and at the same time making a positive impact on the environment.

Green Hall will now primarily serve as an administrative facility and as a hub for non-classroom activities. Several support offices were relocated there this summer, including The Division of Student Affairs. Liberty University Baptist Theological Seminary also moved to a new location in Elmer L. Towns Religion Hall.

Other projects will continue to take place across campus, including the new Hancock Welcome Center, scheduled to be completed by Homecoming Weekend, Oct. 14-15. Work will begin in October on a new baseball stadium between David’s Place and Green Hall. Original plans called for renovating Worthington Stadium, but that will now be the new home of the Lady Flames softball team.

The campus transformation will mean a lot to students, faculty and staff, as well as the greater Lynchburg community.

“The changes will make room for the residential program to continue to grow.  As Liberty enrolls more residential students, more faculty and staff are hired to serve those students, pumping more dollars into the local economy,” Falwell said. “The economic impact of Liberty’s growth has always been positive for the local community.  I believe that a Liberty campus built in Jeffersonian style will also be a source of pride for the local community.”

The Liberty University campus will begin to take on a more unified look, with many new buildings with Jeffersonian-style architecture and more open, green space for students to enjoy. Here are some of the highlights:
•    The third and fourth floors of Arthur S. DeMoss Learning Center, Liberty’s main academic building, are now being completed. This space has never before been used and will create about 140,000 square feet of new academic space that can be occupied this fall. The single-story academic buildings located behind DeMoss will be demolished, with the departments relocating (some temporarily) to the upper floors of DeMoss. A rooftop patio will be added to DeMoss Hall, giving students an outdoor study area with an unobstructed view of the Blue Ridge Mountains.
•    Two new, separate academic buildings will be built directly behind DeMoss Hall. The old buildings housing the School of Government, the Science Hall, Teacher’s Education and Fine Arts, will be demolished to make way for the three-story structures that will be attached by a covered walkway, which can be used as a stage area for outdoor events on the adjacent academic lawn. These buildings will house individual schools of the university in the future.
•    Two new academic buildings near the existing Reber-Thomas Dining Hall will likely house the university’s new School of Health Sciences and another school within the university. New buildings directly beside the Dining Hall could be used for a Food Service expansion.
•    A new freestanding library will be the academic hub of Liberty’s campus. It will overlook a new lake behind the Vines Center.
•    A below-ground basketball practice facility will house two to three practice basketball courts for the men’s and women’s basketball teams, as well as offices. It will feature a rooftop lawn for students to walk from the DeMoss area to the new residential quad. Crews are scheduled to break ground on the facility in November. (A new gym to replace the Schilling Center will also be constructed near the LaHaye Student Union).
•    The new academic buildings will empty out into an amphitheater and lawn area to be used for Student Activities. At the bottom will be the new residence halls, which will replace the “circle dorms,” the oldest dorms on Liberty’s campus. The reconstructed residence hall quad will feature four-story or taller residence halls built around a residential lawn that can also serve as intramural fields.
•    The DeMoss Hall courtyard will receive an entire makeover, with two lawns running perpendicular to each other providing plenty of open space for recreation, outdoor study and events. Each lawn will be equal in size to the lawn behind the Rotunda at the University of Virginia in Charlottesville.