“Don’t settle for anything less than what this great and almighty God has planned for you,” she said.

In front of a crowd of 10,000 and many national media correspondents, including CNN, The Washington Post, CSPAN, The Associated Press and Fox News, Bachmann said “the most important decision I made in not settling was what I was going to do with my faith.”

She shared her personal testimony, of having been raised in a Christian home, but coming to a relationship with Jesus Christ when she was 16. She told how she almost immediately had a hunger for the Word and would wake up at 5 a.m. to read her Bible.

Her speech was laden with Scripture, including what she said became her “life verse” in college: 2 Corinthians 3:17, “ … where the Spirit of the Lord is, there is Liberty,” which she pointed out was also a favorite verse of Liberty University.

Bachmann spoke boldly about the power of the Holy Spirit in her life and the importance of a relationship with Jesus Christ.

“He is the Lord of the universe, the Master, Creator, the Alpha, Omega, the beginning and the end — why would we do anything else and settle?”

Bachmann congratulated the university for its 40-year anniversary. As a young married couple 25 years ago, Bachmann and her husband Marcus (who was with her on Wednesday) visited Thomas Road Baptist Church to hear Liberty’s founder, the Rev. Jerry Falwell, Sr., preach.

She said she is amazed at how Liberty has become the world’s largest Christian university in just 40 years. Capitalizing on a campaign theme, she said the university was not built on people who settled for second best.

In 2006, Bachmann became the first Republican woman elected to the U.S. House of Representatives from Minnesota. She founded the Tea Party Caucus in 2010. She was elected to the Minnesota State Senate in 2000, and before beginning her political career she was a federal tax litigation attorney.

Bachmann has been married for 33 years. She has five biological children and has opened her home to 23 foster children over the years.

She said she did not intend to go into politics, but decided to get involved after her children’s experience in public school education in Minnesota, which she successfully transformed in office.

In addition to her faith, she spoke briefly about her pro-life position, the issue of federal spending, the failures in ObamaCare and the support of Israel.

Bachmann was invited to speak at Liberty in the spring, before she announced she was running for president in June.

Bachmann is the second candidate in the 2012 presidential election to speak at Liberty. Texas Gov. Rick Perry spoke on Sept. 14.

With Bachmann’s visit, Liberty has hosted five of the candidates for the GOP nomination in convocation. Herman Cain spoke in 2009; Newt Gingrich, who has visited Liberty several times, last spoke in October 2010; and Ron Paul spoke in 2008 when he was a candidate for president.

Liberty invites all presidential candidates to speak in convocation. 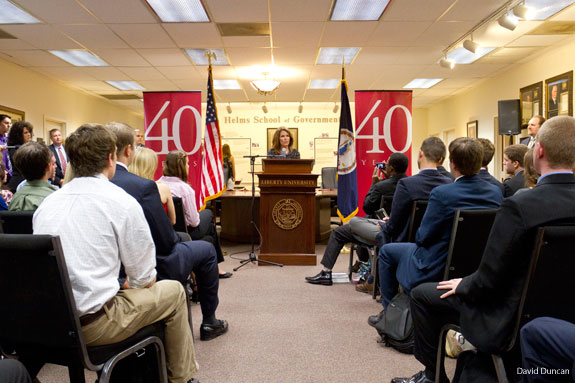 A select group of students at Liberty University’s Helms School of Government and the Liberty Debate team were invited to a special reception with Congresswoman Michele Bachmann, a Republican nominee for the 2012 presidential election, following her speech in Wednesday’s convocation.

“I thought that her coming here really helped her identify who her base was with evangelical Christians and conservatives. I think that it is unique and beneficial for her campaign as well as for the students of the university,” senior Zach Martin, chairman of the College Republican club.

Bachmann reiterated her message from convocation of “not settling” and took time to answer questions.

“I really want to make this your time,” she said. “I would really like to hear what’s on your mind and your thoughts.”

Questions ranged from spiritual issues debated in the evangelical community concerning a woman holding the office of the presidency to her campaign issues in the election to who she would choose as a running mate if she wins the nomination.

Bachmann encouraged students to pursue their career goals but to not forget the opportunity to have a family. As a wife and mother of five biological children and 23 foster children, she said having a family has been the most rewarding experience.

“There is nothing that will bring you more joy than having a family, and knowing [that you have] children who know and walk with the Lord,” she said.

Many students agreed that she was personable and authentic about her life, faith, career successes, campaign, and moral issues.

“Representative Bachmann is a great role model for young conservatives. She consistently defends Biblical principles, such as the sanctity of life and allegiance with Israel,” said senior Dianna Baker, a government major. “I’m thankful she came to Liberty to remind us that there are still politicians with strong character and moral values.”