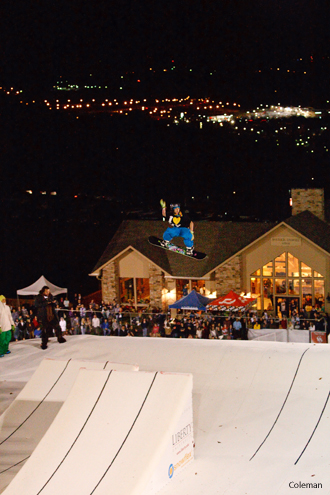 The event, sponsored by Snowshoe Mountain Resort in Snowshoe, W.Va., began with an afternoon Open Jam Session. A panel of judges selected competition finalists from the crowd throughout the day. Event finals began at 10 p.m., with skiers and riders competing in both Big Air and Rail Jam competitions.

The event was filmed by Fuel TV for its College Tour 2010.

Located atop Liberty University’s serene 5,000-acre mountain, the Liberty Mountain Snowflex Centre is the country’s premier point for year-round skiing, snowboarding and tubing. Composed of a beginner slope, an intermediate slope and an advanced slope, and a two-story lodge, this high-performance playground is the first of its kind in the U.S.