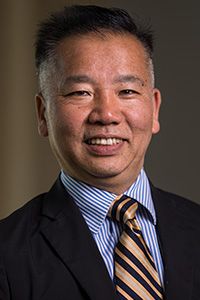 Tim Chang was born in Seoul, South Korean and immigrated to the United States in the early 1970s. In his second year in college, he became a Christ-follower. After one year at Dallas Theological Seminary, he went to Seoul, South Korea to study Korean and do an internship in Korean churches for one year. In 1992, he founded TeKCA (Texas Korean American College Association) to lead Korean American college students to follow Jesus Christ. He has served in Korean American churches in Texas and California for more than 15 years.

In 2006, Tim, with his pregnant spouse and two young children, moved to Northeast China to work with people from North Korea. He has experience working one-to-one with North Koreans and partnering with God’s church in China to engage in North Korean missions.

In 2017, Tim and his family moved back to the United States to teach residentially at Liberty University in the Department of Global Studies. The classes that he has taught at Liberty are Cultural Anthropology, Intercultural Communication and Engagement, Introduction to Global Studies, Barefoot Language Learning, Introduction to Islam, History and Theory of Global Engagement, and Theology Survey II.