Newt and Callista Gingrich spend part of their weekend on campus 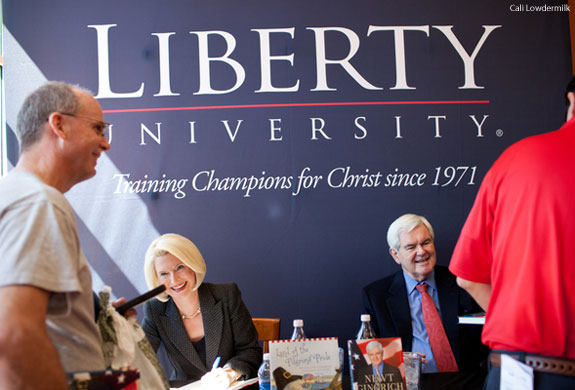 Former Speaker of the House Newt Gingrich visited Liberty University this weekend to present a lecture at the Helms School of Government and sign copies of his books at the Liberty University Barnes & Noble Bookstore along with his wife, Callista, who was promoting her new children’s book, “Land of the Pilgrim’s Pride.”

Callista Gingrich held a special story time at the bookstore Saturday morning to present her book, which teaches children about America’s proud heritage. She signed copies afterward, along with her husband, who signed copies of his books “A Nation Like No Other” and “To Save America."

The couple said they were drawn to Liberty because of its strong stance on upholding America’s core values and Christian ethics.

Newt Gingrich called Liberty a "remarkable institution," citing its "depth of commitment to America, to the fact that we are endowed by our Creator, and the desire to give young people an opportunity to encounter the core values and the religious beliefs which are at the very heart of the American experience."

He arrived on Friday evening to present a special one-hour lecture on what it means to be an American, focusing on the country’s rich heritage, distinguishing principles, and bountiful opportunities.

The lecture was recorded and will be used in future course development. Newt Gingrich has already helped the university create a course, "American Exceptionalism" which is available through Liberty University Online.

He argued as citizens of this great nation, our rights come from God ultimately, not a president, Congress, or the Supreme Court. As such, we are to be responsible citizens, he said, hard working, with a commitment to benefiting society for the greater good. In America, there is a unique opportunity "to be business rivals in the morning and come together in the afternoon to benefit the community," he said, because as citizens we can balance the public and private sector.

“Liberty reassures me that there is a place where people are actually happy that you are in favor of classic American values,” he said. “There are so many campuses now occupied by tenured faculty who despise America and who are opposed to American values.”

After the lecture, Newt Gingrich held a Q-and-A session for the students. He fielded questions ranging from Social Security issues to energy independence, international relations, and the economy.

He also responded to a question about those who choose not to support one of the two primary candidates: “Any vote not for Mitt Romney is a vote for Obama. … Ask them if they are comfortable with four more years of Obama.”

Newt Gingrich explained even he and Romney had their differences as he vied for the Republican nomination earlier this year, but shared many ways in which he agrees with the presidential candidate on policy and even boasted Romney’s credentials as a former governor (Mass.).

When asked about crossing party lines to get things done, he explained when he was speaker of the house his relationship with President Bill Clinton was not the greatest, but they went behind closed doors, argued it out, and made compromises. Again, Newt Gingrich gave Romney a nod as he said a governor understands how to do this, for the greater good of this country.

As the formalities subsided, he took time to interact with the students and take pictures with them.

“(Liberty) is going to become one of the great intellectual institutions in the world and an institution which stands for key values and is not at all afraid or ashamed to stand up for what it believes in,” Newt Gingrich said. “I look at where you are today, it is beyond (Dr. Jerry Falwell, Sr.’s) wildest dreams … and he had pretty wild dreams.”

Newt Gingrich has visited Liberty several times and has been featured as a Convocation speaker and delivered the May 2007 Commencement address. He recently participated in a simulcast lecture with residential and online students at Liberty’s Helms School of Government.