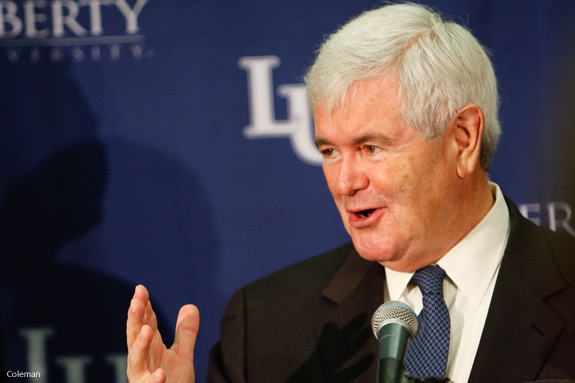 Former Speaker of the House Newt Gingrich roused Liberty University students at Wednesday’s convocation with a call to return our country to “We the People,” prescribing fiscal responsibility, judicial restraint and an awakening of individual sovereignty.

“What I want to share with you today is not politically correct,” he said, “but I believe it is true.”

“American civilization is in greater trouble today, and in greater danger of disappearing than it was in 1971, when Rev. [Jerry] Falwell launched this great undertaking,” he said. Although we have defeated the threat of Communism, Gingrich said we now face new threats in radical Islamism, a court system that is “driving God from public life and destroying more than 2,000 years of religious commitments in our social policy,” and an education establishment dominated by anti-religious fanaticism.

“We have endured our history being suppressed, distorted and just plain lied about by educational, news media and entertainment personalities,” he said.

A society dedicated to truth will reject the efforts of social engineering and political dishonesty, he said.

Gingrich reminded students that American exceptionalism is not merely national pride, but “a term that relates directly to our unique assertion of an unprecedented set of rights granted by God.”

He said our Declaration of Independence affords every American — and only Americans — a God-given sovereignty, under which “You loan power to the state; the state does not loan power to you. This is why the Constitution begins, ‘We the People.’ It does not begin, ‘We the politicians,’ ‘We the judges’ or ‘We the bureaucrats.’”

The concept of driving God out of the public square, he said, is one that will destroy America.

Gingrich drew hearty applause from students for his proposals to end federal funding of abortion, repeal the health care bill, balance the federal budget and teach the Declaration of Independence in schools.

The visit was the fifth for Gingrich, who delivered the Commencement keynote address in May 2007, just days after Liberty’s founder, Dr. Jerry Falwell, passed away. He also spoke at Super Conference in 1994, an event sponsored by Thomas Road Baptist Church, and at Liberty’s Commencement in 1991 and convocation in 1987.