Liberty University Marketing presented this video, highlighting the university's successes and exciting new projects and programs, during the annual All University Faculty Meeting. 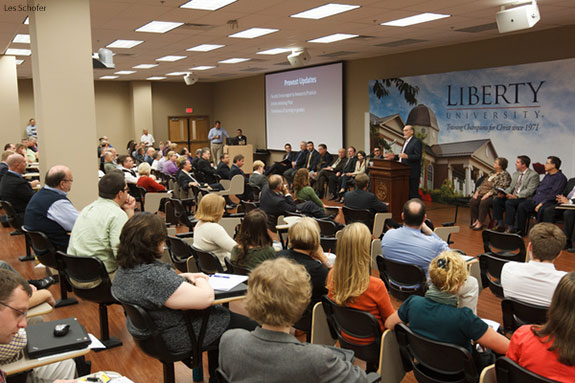 Liberty University held its annual All University Faculty Meeting on Wednesday, Oct. 17, in Arthur S. DeMoss Learning Center. More than 1,000 attended the meeting, which included many online faculty logging in to the special webcast from their homes, workplaces, airports, and mission fields.

Dr. Ronald Godwin, Liberty’s senior vice president for academic affairs and provost, told the online faculty he wanted them to “feel like you’re a part of the community.”

“We want you to participate in every way you possibly can, no matter where you are located in this entire world. This is the most unbelievable place, though, right here in Lynchburg, Va. This main campus of Liberty University is an incredibly happening place.”

He announced that while many universities are happy to build one building every 10 years, Liberty has more than 60 construction projects under way, among them the Jerry Falwell Library, a new baseball stadium, a new basketball practice facility, and a new medical school.

To better familiarize the online faculty with the growth on Liberty’s physical campus, a video by Liberty University Marketing was shown. It also documented many other advancements across campus, including several proposed academic programs.

Dr. Ron Hawkins, vice provost, then addressed the faculty on the importance of mentoring students.

“This is such a great place because so many of you here feel you are actually fulfilling the calling of God for your life — you’re here because God has called you to be teachers — and what an exciting thing to be involved in,” he said. “At Liberty what we’ve found again and again, with any research we do, is that at the heart of the student experience is the relationship they sustain with faculty — when we look them in the eye and see the desire to learn, and we interact with them, that’s where the reward is.”

Because of this distinctive, he announced Liberty has launched a pilot program that will give online students the same high quality of advising throughout their time with Liberty. Now, 2,000 online students have been paired with a permanent advisor who will mentor them from the beginning to the end of their program, Hawkins said.

“It’s about relationships — your relationship with God, that relationship coming alive in the classroom, and you loving students the way God loves you. And what happens? Champions for Christ.”

Reports were given on Liberty’s Center for Teaching Excellence, which provides opportunities for professional development for residential and online faculty through workshops, consultations and mentoring that include faith learning integration, and on Liberty’s Center for Academic Support and Advising Services (CASAS), which is working to host more job fairs and bolster the LU Network, a job search online that is proving successful for employers who specifically want Liberty University talent.

“As we’re hearing from employers, they’re very excited to work with us at we reach out, because we have an extra benefit that a lot of other institutions don’t have — we provide the academic quality, but we also provide the character, and the work ethic and the skills that they need,” Dr. Brian Yates, CASAS dean.

It was also announced that through Liberty’s Center for Advancement of Faculty Excellence (CAFE) 800 online courses have been developed in over 100 programs of study since 2006. Liberty is one of only a few universities to have a centralized system of online course development.

During the meeting, presentations were given on Liberty’s new Zaki Gordon Cinematic Arts Center, which held a dedication event recently, and the new medical school, which is scheduled to break ground this fall.

A guest speaker, Don Banker, CEO of Banker Steel Co., represented the United Way and ended the meeting by presenting a plan for Liberty to partner with the nonprofit.