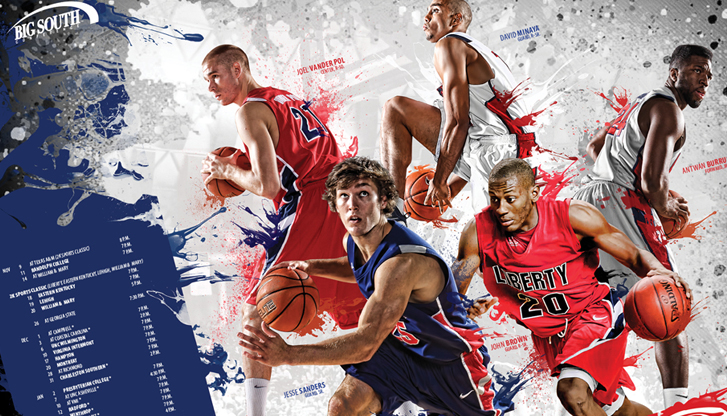 The 2012 Flames Basketball Poster was one of 18 Best In Show selections in the 27th annual Educational Advertising Awards. Read more at www.libertyflames.com. Listen to an interview with the staff at victoryfm.net.

Liberty University’s Office of Promotional Publications was highly decorated in the 27th annual Educational Advertising Awards, sponsored by the Higher Education Marketing Report (HMR). Liberty’s marketing teams took home gold in two categories and received a Best of Show selection, along with one silver, one bronze and two merit awards.

The Educational Advertising Awards is the largest competition of its kind in the country, with more than 1,000 colleges, universities and secondary schools from all 50 states and several foreign countries submitting more than 2,900 entries this year. Judges chose 18 Best of Show winners, 201 gold awards and 180 silver awards.

“Over the past year, the Office of Promotional Publications has expanded to meet the needs of the university’s growth and development, while simultaneously excelling in creative accomplishment. Our office is continuing efforts to unify the university brand and message, ensuring that Liberty and our mission to Train Champions for Christ stand out among other academic institutions,” said Ron Kennedy, Senior Vice President of Marketing and Promotional Publications at Liberty.

Designer Brian Wallace and project coordinator Ashley Holloway developed the Flames Basketball Poster, which earned Liberty the Best of Show selection and a gold award in the poster category.

HMR has been the nation’s leading marketing publication for higher education marketing professionals for 27 years.