Every Wednesday morning, upwards of 100 students and faculty from Liberty University College of Osteopathic Medicine (LUCOM) gather in one of the lecture auditoriums at the Center for Medical and Health Sciences for their own version of an LU staple — Convocation. Featuring local speakers and an in-house praise and worship band, the event gives participants an opportunity to take a break from their studies and nourish their spirits.

Students were first given the opportunity to participate in August 2014 when Dr. Ronnie Martin, the founding dean of LUCOM, challenged staff to hold a formal Convocation in the newly completed facility.

“He believed that (including students) helps set the tone of who we are as a school, and it helps make our identity known to the students who are coming in,” said Troy Burnett, associate director of student services for LUCOM.

Since that initial charge, Burnett and his Convocation committee have worked to give Liberty osteopathic medical students the opportunity to gather weekly to focus on topics with a spiritual theme. 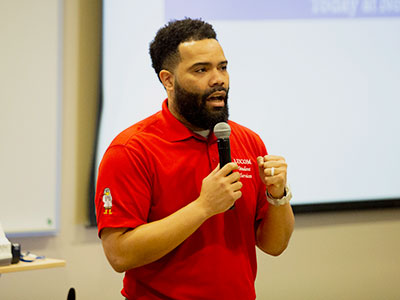 A recent Convocation series, “Take Me to Church,” brought in local pastors to preach and help student-doctors engage with churches in the Lynchburg community. The series was so popular that its sequel, “Take Me to Church, Pt. 2,” is currently underway. “This gives students the opportunity to go to a church service without actually physically going to that church,” Burnett added. “If they like it, they can go on a Sunday or try another church.”

Future LUCOM Convocations include a series on apologetics with faculty from the Center for Creation Studies and the John W. Rawlings School of Divinity and an Easter series with the chair of the Liberty Department of Philosophy, Dr. Gary Habermas, a renowned expert on the resurrection of Jesus Christ. At a Convocation in March, students who will have participated in the annual Spring Break LUCOM mission trip to the Dominican Republic will share their experience.

But not every Convocation throughout the semester is programmed, said Burnett. “Sometimes it’s about presenting ourselves to the Lord, just playing worship songs and reflecting on His goodness.”

This weekly worship may be one of the most unique elements of the LUCOM Convocation because while it is common to see the student-doctors poring over textbooks or exploring the human body in an anatomy lab, it is less likely to see them singing or playing an instrument as part of a worship band. Dr. Amanda Troy, assistant professor of anatomy, oversees the band, which has grown from seven students the first year to a team of over 30. 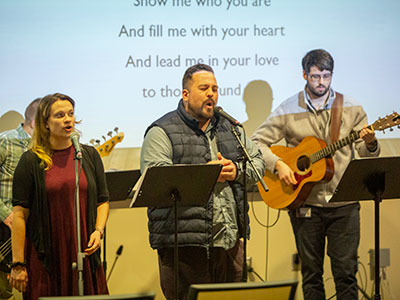 One member of the worship team, Phil Anderson, a third-year student-doctor, sometimes returns from his clinical rotations in Lynchburg to sing in the band. “The goal when we are leading worship is to not be noticed, but to facilitate other people singing and worshiping to the Lord,” he said.

Ashley Kwon, a second-year student-doctor from Maryland, was drawn to LUCOM because of its Christian emphasis, which she said has helped her to answer God’s call on her life — a rewarding but rigorous pursuit. “Having convo revives me. There are times I’d rather take the extra hour to study, but then God reminds me that I’m here for Him, not for me. It’s a great reminder that it’s His strength, not mine.”

Burnett said that LUCOM Convocation is helping osteopathic medical students to be more balanced individuals and to be more productive in their medical careers and their lives.

“A physician can see thousands of patients per year. We can’t guarantee that every time they interact with someone it is going to be a faith experience, but it increases the opportunity that the message can go out and be spread by us just being faithful at this one little place called Convocation.”