“We were pleased to be able to provide to our students this great opportunity for meaningful engagement with influential leaders in Washington,” Hurt said. “It was not only a chance for our fellows to explore ways that they can make a positive difference in our nation’s capital, but also a chance for leaders in Washington to see for themselves the quality of students that we are producing here at Liberty.”

The symposium began with Liberty alumnus DJ Jordan (’02), former Communications Director for Sen. James Lankford (OK) and current candidate for Virginia House of Delegates (R-31), addressing students and alumni on courageous leadership and the importance of clear, concise messaging on complex and controversial policies. Jordan also spoke on a number of pressing cultural and political challenges facing Virginia in the current election cycle.

Sen. Marsha Blackburn (TN) also took the opportunity to speak to LU students and Washington interns on the value of personal engagement in the age of digital division. She advised young people to take initiative in solving problems and meeting needs, to thoughtfully listen and respond to opposing ideas, and to always show gratitude for every opportunity, especially with handwritten notes. Blackburn has served in public office for over three decades. 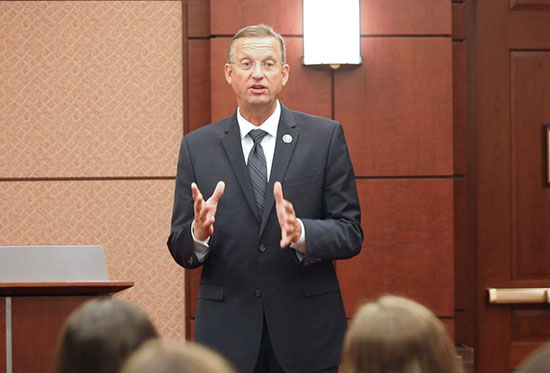 Ranking member of the House Judiciary Committee, U.S. Rep. Doug Collins (R-GA), gave a rousing pep talk to students on the meaning of service and leadership principles he learned from President Theodore Roosevelt. Collins drew from his own experience as a pastor, Air Force chaplain serving in Iraq, and a mid-life law student, giving students a charge to serve God where He has uniquely planted them. Collins continued by speaking about his legislative plans for the current session and how to find success as a minority member of Congress.

U.S. Rep. Ben Cline (R-VA) next joined the symposium to discuss his experience as a Capitol Hill intern and staffer for former U.S. Rep. Bob Goodlatte and what specific steps students can take to ensure that they are successful at the start of their careers. Liberty alumnus and Chief of Staff to Congressman Roger Marshall, Brent Robertson (’11), wrapped up the day by speaking to LU students about the vital importance of discipline and hard work in the nation’s capital.

Prior to Wednesday’s symposium, Liberty Law’s Dean Faulkner also took the opportunity to meet and speak to a gathering of law students who were touring the U.S. Supreme Court and White House.

“This is an exciting time to be at Liberty University with unprecedented opportunities for our students in the Washington Fellowship program,” said Dean Faulkner. “Each day our students and graduates are fulfilling the Christian mission of our school with purpose and conviction.”

The Washington Fellowship is a semester-long internship program open to Liberty students from all degree programs, giving them the unique opportunity to live and work in Washington, D.C. This summer, there are 21 Liberty students participating in the program. Internship placements include the National Park Service, Salvation Army, U.S. Marshals Service, and Family Research Council.

For more information on the Washington Fellowship, or to submit an application online, visit the Fellowship webpage. 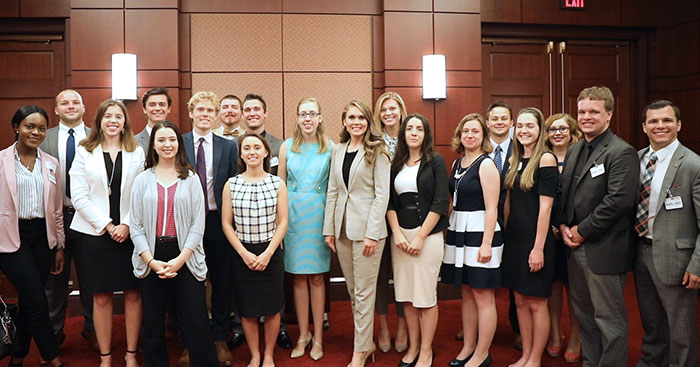