After serving for 26 years in the U.S. House of Representatives, former Congressman Bob Goodlatte visited campus on Tuesday to share with students some of the lessons he gleaned during his long tenure in public service. 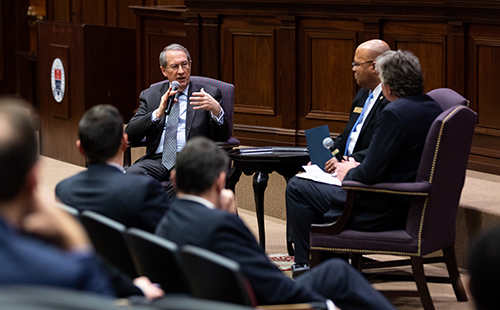 Goodlatte, who retired as Virginia's sixth district representative after his 13th term ended in January, sat down for a question-and-answer session with Helms School of Government and School of Law students early in the afternoon, sharing highlights from his career and offering advice to those interested in working in politics.

Center for Law & Government Executive Director Robert Hurt and Interim Government Dean Ron Miller also hosted Goodlatte in the School of Law’s Supreme Courtroom for a separate discussion about the importance of the rule of law.

“Politics is important to everybody, not just the people who run for office,” said Goodlatte, who has chaired the House agriculture and judiciary committees. “If you are concerned about your future and the future of our country, then get involved (in politics) in some way or another. … It takes a lot of participation by a lot of people to get the right person in office and then to hold them accountable.”

Having served during the impeachment of President Bill Clinton, 9/11, and the 2008 financial crisis, Goodlatte offered a broad range of perspective on several issues, including executive authority, political divides, due process, and immigration, where he expressed a need for compromise on both sides of the aisle.

Goodlatte stressed the importance of showing respect when people engage on hot-button issues and said that serving the best interest of the general public often involves compromise.

“People need to get news from more sources, and then evaluate it, and then come to conclusions,” he added. 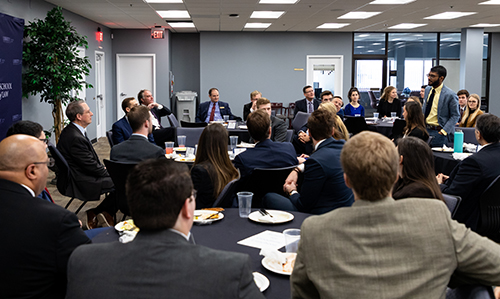 Goodlatte called Liberty “a truly amazing place” and said he hoped what he told students inspired them.

“It’s important to share what I have done so people can get an idea about what they want to do in the future,” Goodlatte said. “Representative democracy is a full-time job for (politicians) but it requires a part-time, ongoing process of the members of their constituency to speak up about things that they like and don’t like and to participate in the election process and get involved in more than just voting on Election Day.”

First-year law student Abigail Wasil said she was enlightened on “how important even the little issues are, to understand both parties, because we all need to come together in order to make change.”

“It gives us an opportunity to be inspired and to see a very vivid route to politics and how you can use your law degree to represent your fellow citizens,” she added.

Junior Tim Murcek, who is studying government and politics, said the discussion with Goodlatte gave him “a taste for what it is like” to work in politics.

“Liberty does a really good job of connecting students with people in their fields,” he said. “Being able to ask questions that you are specifically interested in, in your realm and to people further along than you, provides an incredible amount of value. It’s a very, very good experience overall that adds to the academic rigor that Liberty offers.”