LU Praise, Liberty University’s premiere gospel choir, led a Christmas worship service at the Museum of the Bible in Washington, D.C., on Wednesday night for members of the U.S. Congress. 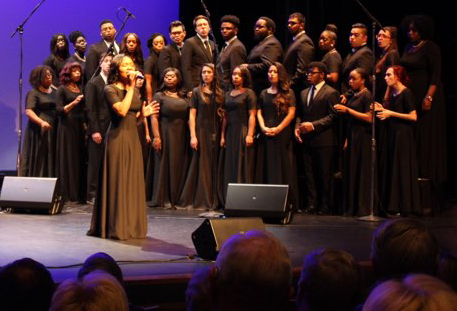 It was the choir’s second year to perform at the event, called Carols in the Capitol. (This year’s event was originally scheduled to take place in the U.S. Capitol rotunda, but was moved to the museum due to President George H.W. Bush’s funeral services.) Carols in the Capitol was started in 2016 by the Capitol Worship ministry.

LU Praise was invited back again this year to lead the music, along with prolific singer/songwriter Steve Amerson.

More than 70 Congressional leaders attended the event, which also included Scripture readings from both the House and Senate chaplains.

“Their soulful renditions of Christmas music provided a spirit-filled interpretation that pushed us to our feet, as we lifted holy hands in praise to the Prince of Peace,” Black said. “Liberty University presented us with an early Christmas gift, in their generous use of marvelous talents for God’s glory.”

Their music included traditional Christmas songs with a gospel twist, arranged by Liberty University School of Music faculty members, such as “Joy,” “Emmanuel,” and “Holy Night.” The choir also led the crowd in “O Come All Ye Faithful,” and “Hark! The Herald Angels Sing.”

“It meant so much that we were able to sing in front of the nation’s leaders,” said KyLisa Freeman, a student in Liberty’s Master of Arts in Music & Worship: Conducting program. “The Bible mandates that we pray for those in authority. Well, they could always use some singing, too.” 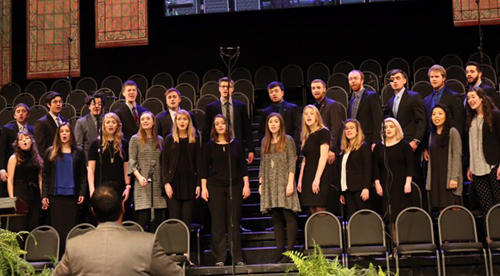 She said one of her favorite moments was when the team “enthusiastically sang out the name of Jesus” during “Emmanuel.”

“Our overflow of worship for our Lord was responded to by the whole room standing up and joining us,” she said. “The thing that stood out most to me was how much of the evening resembled a church service — people of Congress clapping, and singing, and saying, ‘Amen.’ In that moment, I was able to see the fruits of a united country.”

Dr. Vernon Whaley, LU Praise director and dean of the School of Music, said he was amazed at how many national leaders “really value faith.”

“It was amazing,” he said. “Our students really came alive. It was one of those once-in-a-lifetime experiences.”

Whaley said LU Praise has been invited back again for next year.

More School of Music students have been traveling for holiday concerts in recent weeks. Over Thanksgiving break, the traveling a cappella group SHINE joined other Liberty student singers for some high-profile events in New York City. On Nov. 17, the students were part of a massive choir at the prestigious Carnegie Hall for the annual Christmas in New York concert. Liberty was among an elite group of specially selected performers, which also included Denver & the Mile High Orchestra and artists Travis and Lily Cottrell and Marcia Wilder. Composer Phil Barfoot hosted the event.

According to Stephen Müller, associate dean for the Center for Music Education & Performance, there were approximately 200 delegates from the United Nations in attendance.

“This was a fabulous honor,” he said. “Most musicians dream of performing at Carnegie Hall. This is bucket-list stuff, and our students responded so amazingly.”

Senior Daniel Gray, a student in the B.M. Worship Leadership program, said the highlight for many people was a medley of “What a Beautiful Name” and “Agnus Dei,” led by the Cottrells.

“Beginning with all of us on the platform, the Holy Spirit swept across the building as people stood and worshipped throughout this formal venue to exalt Jesus Christ together,” he said. “It was a holy moment and a powerful witness to those in attendance who did not know Christ.”

SHINE also performed for church services at the historic Calvary Baptist Church in Manhattan and at the famous Brooklyn Tabernacle.

Liberty’s music groups have risen to global prominence in recent years. LU Praise was featured at a major cultural event in China last year after performing twice for President Donald Trump — at his Inaugural National Prayer Service and at Liberty’s Commencement. 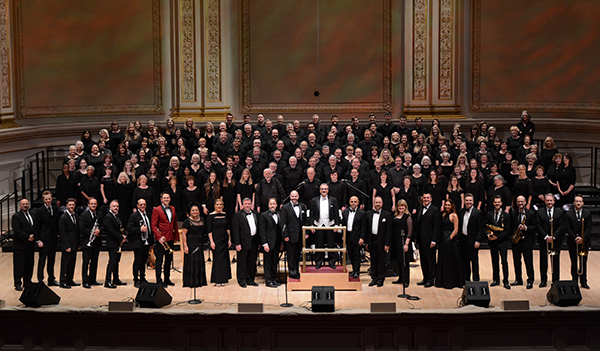