Work is heating up for students at Liberty University’s Cinematic Arts, Zaki Gordon Center as they take on various roles on the set of their feature film.

“We immediately get hands-on with the equipment, and it is really just a way of preparing us to work in the industry right outside of this,” said junior cinematic arts student Austin Reyle, who is working with BTS (behind-the-scenes) and as an assistant location manager for “Commander,” Liberty’s latest feature film.

Liberty’s film program is a two-year immersion cohort, meaning students focus solely on filmmaking during their last two years. Students earn credits on the set of short films and feature-length productions, where they serve in at least two different roles. Film professionals are hired for the university’s productions and work side-by-side with students.

Liberty began production this month on “Commander,” its fifth major motion picture project. (The school’s most recent film, “Extraordinary,” became the first student-driven project to have a national theatrical release. It followed the success of “God’s Compass,” which premiered on cable television and won Best Screenplay at the International Christian Film Festival.) 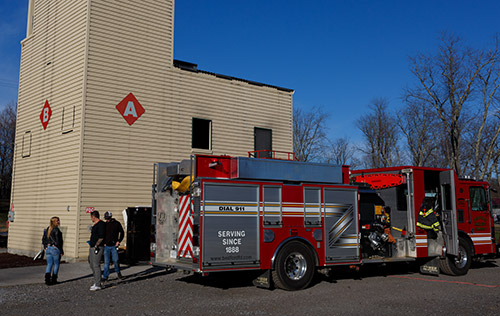 “Commander” is set to release in approximately 1,200 theaters in October. The story involves a veteran firefighter who develops PTSD and begins having traumatic flashbacks. Because the film includes rescue workers in action — including a blazing rescue — students have had the unique opportunity to meet and to work with local heroes of the Bedford Fire Department. Their training facility was used for the set. A house structure, which was built near the facility specifically for the movie, was also used during a fire scene. Firefighters were also used as stand-ins and background actors.

“This experience was educational for both the students and our firefighters,” said Bedford Fire Chief Brad Creasy. “It allowed the students to see how much it takes, both through logistics and planning, to bring safety and authenticity to a set like this and, likewise, it gave our firemen a real inside look and opportunity to see the many facets of filmmaking. … Working with the LU cinematic arts group has been a great experience for everyone involved.” 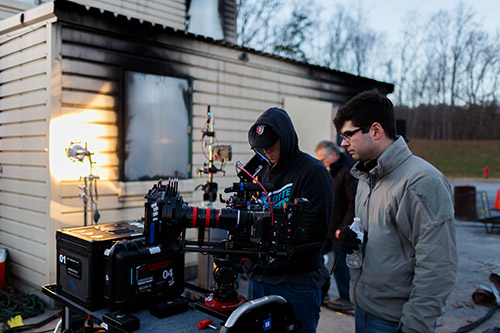 Thanks to the local support, students were able to get experience working with effects on a major-production scale.

“Working on the fire scene has been awesome,” said junior Kimberly Coopwood. “We’ve been able to do a lot of cool tricks that make it look real,” such as using pyrotechnics and various lighting techniques to simulate a blaze. “To see firsthand how you can create fire for a film is just a wild experience in itself.”

The film is produced by Rick Eldridge, CEO and co-owner of Reel Works Studios. Eldridge has produced nearly 40 film projects, including “The Ultimate Gift” and “Bobby Jones – Stroke of Genius.”

“We’re doing a real project that is going to be distributed on a commercial marketplace,” he said. “Students have an opportunity to shadow and work alongside pros in each of the departments. They’re not just watching; they’re working, getting their hands dirty. Having that hands-on experience is what it’s all about.”

Coopwood is a BTS runner and does set photography and lighting.

“I’ve grown a lot,” she said. “Hearing from the (film industry) professionals and being able to go directly to them and say, ‘What is this? What is that? Why are you doing that?’ has been so helpful.”

Junior Elijah Loyd said that working on the movie has forced him to develop new skills.

“I haven’t really done anything with makeup before,” said Loyd, a makeup assistant. “I really had to learn how to hit the ground running and learn as I go. Especially with this fire scene, I’ve had to learn how to work a lot with dirt and ash to create the aesthetic of someone going through a blazing building.”

Working on the set of a feature film is more than a notch on the students’ professional belts, because in the film industry, one gig often leads to another.

“A lot of professionals hire right off set, so there’s always a possibility that you can walk into the summer with a job,” Coopwood said.