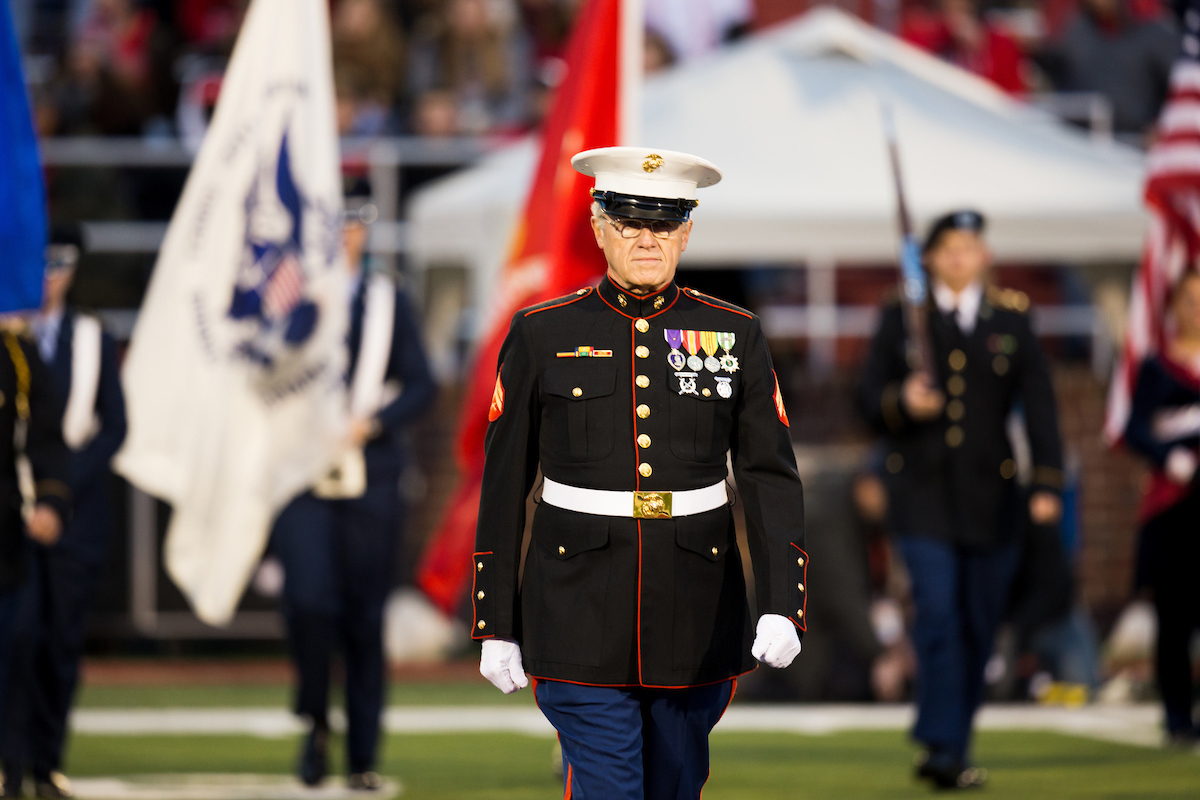 In recognition of his extraordinary heroism and sacrifice in the line of duty, Corporal Gary Witt of the United States Marine Corps was awarded the George Rogers Champion of Freedom Award as part of Liberty University’s Military Appreciation celebration during halftime at Saturday’s football game.

The award is given annually by Liberty during Military Emphasis Week, to a man or woman who exemplified courage and honor while serving in the United States Armed Forces and continues to serve as an outstanding ambassador in his or her community. Witt is the eighth recipient of the award, named in honor of WWII POW George Rogers, a survivor of the Bataan Death March. Rogers served at Liberty from 1974-99, starting as its chief financial officer and most recently as vice president of finance and administration. A bronze bust honoring Rogers and all Champion of Freedom Award winners sits just inside the gates of Williams Stadium.

During Witt's 14-month deployment in the Vietnam War as a Marine, Witt earned two Purple Hearts, the prestigious award a member of the United States Military receives when he or she is wounded or killed in action.

While serving in Vietnam, Witt was assigned to Golf 2nd Battalion, 4th Marines. He held many titles during his deployment, including Company Point Man, Fire Team Leader, Recon Team member, Supply Sergeant, and Non-Commissioned Officer in Charge of Troops. In his final duty in Okinawa, he served as Rifle Range Instructor for the M16 rifle, qualifying troops headed for Vietnam.

Witt successfully led the recent effort to designate Liberty as the first Purple Heart University in Virginia in recognition of Liberty’s support of military members, veterans, and their families. In July, Liberty installed “Purple Heart University” signs at the entrances to campus, and also reserved a parking space near DeMoss Hall for Purple Heart recipients and all others who have been wounded in combat.

“After we had designated Lynchburg and its surrounding counties into a Purple heart community, I said, ‘Why not get Liberty University involved and be a Purple Heart University?’” Witt said. “So I got to looking at the things (Liberty) already does for the military." Liberty was well-deserving of the designation, he said. "It was about making the public aware what was available here and how military-friendly Liberty is.”

Having grown up in Lynchburg, Witt has also been an integral member of many of the community’s initiatives to become more military-friendly. As a chapter commander of the Military Order of the Purple Heart (MOPH) and the Sergeant-at-Arms for State Department of Virginia MOPH, he assisted in the fundraising efforts to install Purple Heart Monuments at the D-Day Memorial in Bedford County, Monument Terrace in downtown Lynchburg, and Altavista Memorial Park, among other locations.

Witt has also been an active member in the weekly Monument Terrace Troop Rally, where veterans and supporters of the U.S. military gather in downtown Lynchburg every Friday from noon to 1 p.m. with flags and signs in recognition of U.S. veterans, fallen soldiers, and the troops who are currently serving their deployment.

“The rally at Monument Terrace is a unique experience that happens every week,” Witt said. “And every veteran who has attended has been very impressed seeing all the people there, and they often feel like they want to get involved. Over the years, it has gone from just a few veterans meeting there every week, and now it’s been going on for 829 weeks in a row.”

Military Emphasis Week is hosted by Liberty’s Office of Military Affairs, which works throughout the year to ensure that Liberty’s military students and their families receive the support to succeed in their academic and professional careers.

Visit Liberty.edu/MilitaryAffairs for more information on education benefits and resources.