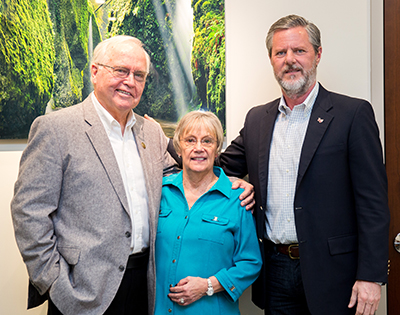 The National Sheriffs’ Association (NSA) has given Bedford County Sheriff Mike Brown a huge honor: Sheriff of the Year. It’s a title he wears with pride — and with a good dose of humility.

“I’m very fortunate,” Brown said. “I’m not sure I deserve it. It’s not me; all of this is because of the people I have working for me and have been working for me for the last 21 years. They are the ones who make it happen.”

Many people in Central Virginia, including many at Liberty University, know of Sheriff Brown’s accomplishments. Brown has achieved a sort of local celebrity status, appearing frequently in local TV newscasts and newspapers over the years, discussing various crimes his department has worked and solved. He has also received nationwide attention for his department’s efforts, many of which impressed the NSA and led to the honor. Brown had the opportunity to meet with President Donald Trump while attending an NSA conference in Washington, D.C., earlier this month.

“On behalf of the Liberty University community, I am proud to congratulate Sheriff Mike Brown on being named Sheriff of the Year,” said Liberty President Jerry Falwell. “No one deserves this honor more than Sheriff Brown. His achievements in his decades of service in law enforcement are unprecedented. We’re proud to call Sheriff Brown and his wife, Janet, our good friends.”

Sheriff Brown himself is proudest of his department’s work with the Internet Crimes Against Children (ICAC) Task Force. Bedford County is home to one of 10 ICAC units in the country, which tracks and investigates illegal online activity aimed at children.

To raise awareness about the dangers of social media, especially for children and teens, Sheriff Brown worked on the movie “Finding Faith,” starring Erik Estrada and a number of Liberty students. Liberty was directly involved in the film, providing locations, housing, and equipment. Over 90 percent of those working on the film were affiliated with Liberty in some way. The movie tells the story of a teenage girl whose innocent use of social media leads to her abduction. It is based largely on real-life cases Sheriff Brown and his team have worked. The movie was backed by The Safe Surfin’ Foundation, which was started by Brown and supplies Internet safety education materials to students across the country at no cost to the user.

Liberty also supported Brown's department in January 2015 when it provided box lunches and transportation for law enforcement who were conducting a search on Taylor Mountain in a case involving two sisters who went missing in 1975.

Other achievements under Brown’s leadership include:

>The Protect the Protectors Program — The Bedford County Sheriff’s Office has raised hundreds of thousands of dollars to provide more than 600 ballistic vests to officers across the country.

>COPsync — After being turned down on his request for more School Resource Officers, Brown set out to improve communications between schools and all officers. With the press of a button, any school can alert the five nearest deputies of trouble. A first in Virginia, this system is even faster than dialing 9-1-1.

>Cyberbullying Awareness Program — In an effort to fight youth suicide, Sheriff Brown secured private donations to produce an educational DVD to raise awareness of the dangers and signs of cyberbullying. 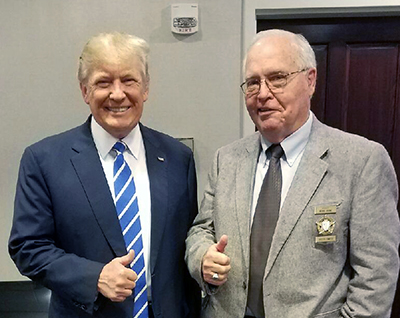 Sheriff Brown and his wife describe themselves as lifelong friends of the university.

“Our relationship with Liberty is strong, always has been,” Sheriff Brown said.

In fact, Liberty’s founder, the late Dr. Jerry Falwell, helped the Brown family through a very dark time in their lives — the death of their 17-year-old son, Matthew, in a car accident in 1997. Both parents were devastated, but Janet was struggling mightily with the loss.

“For about a year, I really didn’t do anything,” said Dr. Janet Brown. “Then I ran into Doc (Falwell) at a social function, and he told me there was a position available in his office and I should apply for it, and I did.”

She got the job, then earned her degree in psychology in 2002. Next came her master’s in 2004 and then teaching part time. She received her Ph.D. from Liberty in 2008 and is now an associate professor of psychology.

“I don’t know what would’ve happened to me,” said Janet Brown. “I know it was the hand of God. Once I came to work for Dr. Falwell, my life turned around.”

The Browns aren’t sure what will come next for them. Sheriff Brown has three more years in his final term in office. His wife says she has no plans to retire.

“I love what I’m doing. I love my students. I love Liberty.”

“We owe so much to both Doc and Jerry (President Falwell) and to Liberty,” Sheriff Brown said. “We really do.”