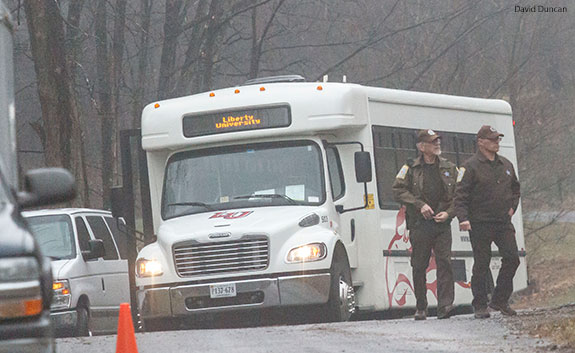 In 1975, the Lyon sisters — Sheila, 12, and Katherine, 10 — were last seen walking to the Wheaton Plaza mall in the Washington, D.C., suburb of Wheaton, Md., from their nearby home. Investigators now believe the suspect in the case owned property on Taylor Mountain in Bedford County, which is the subject search area.

Bedford County Sheriff Michael Brown said he could not describe how thankful he was for Liberty’s assistance during this time.

“There is nothing that President Jerry Falwell and Liberty will not provide for local law enforcement,” he said. “This is a financial cost for the sheriff’s office because we are a small department compared to some. I cannot say enough about how thankful I am to Liberty for providing the lunches and transportation for investigators up and down the mountain.”

For 12 hours per day from Jan. 12-15, members from the FBI field office in Richmond, Va., and other law enforcement agencies will eat meals provided by Sodexo, Liberty’s dining services provider, at Thaxton Baptist Church in Bedford. Liberty University Transit Services will shuttle them to and from Taylor Mountain throughout the search process.

“We are hoping to uncover evidence on the mountain that will lead us to a suspect after a proper examination,” Brown said. “The priority is to locate these two young girls so that we can return remains to their parents and give them a (proper) burial. No parent should go through not knowing where their children are.”