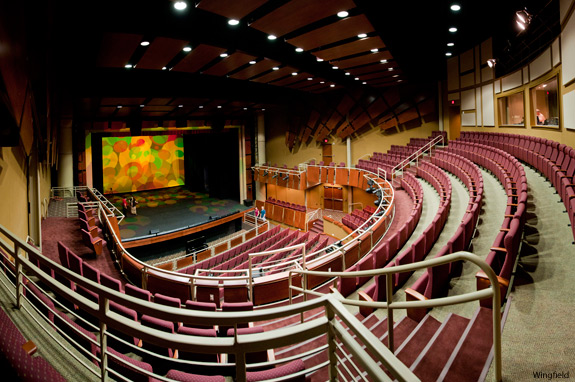 An open house was held at the new Tower Theater at Liberty University Wednesday, giving students and the local press a chance to view the $7 million project.

The contemporary-style 640-seat theater consists of balcony seating, an orchestra pit, catwalks, a fly tower (an intricate system of ropes and pulleys that can move Broadway-size sets and scenery), a box office and 12,000 square feet of support area that includes dressing rooms, a practice room, offices, costume shop, prop room and woodworking and scene shops. The existing lobby also received a facelift.

“It’s much bigger,” said sophomore Anthony Boardwine as he walked into the theater on Wednesday. “There will be much more opportunity for cool effects … and more experience for the students, so it’s very practical.”

The project broke ground in October 2009 in the only undeveloped portion of the 1 million-square-foot Campus North building (originally a cell phone plant), dubbed “the tower.” The space, with its 85-foot ceiling, turned out to be perfect for a new theater, a desperate need for Liberty’s growing Theatre Arts Department.

“Our drama productions have become such high-quality that the facility just didn’t match them. We have needed this for a long time,” said Chancellor Jerry Falwell, Jr.

By using the available space, Falwell said the pricetag was a third of what it would have cost if it were built from scratch.

That doesn’t mean planners skimped on furnishings and equipment, however. Its complex rigging system and lighting and audio capabilities are on par with the nation’s best theaters.

The theater also lends itself to many other uses to enhance student life, including showing high-definition, widescreen movies. 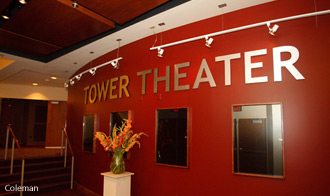 “It’s exactly what we talked about in the planning stages, which is the room itself would be a work of art,” she said. “I feel that it is a very artistic space; it’s a creative environment. It’s relaxing, so the audience will feel very free to even be creative in their own imaginations sitting in this room.”

Cooper and her staff didn’t wait to put the new theater to use. Auditions began last week for the first show of the season, Hairspray, opening Sept. 24.

“It’s a show that’s a celebration, and so we thought it was perfect for opening up the theater … it allows for a huge cast so we could get as many of our students involved in the first show on this stage.”

She said they will be using all the lights and every single fly rig.

“What I’ve told my staff is that I want it to look like a birthday cake exploded.”

The rest of the season’s lineup is a cause to celebrate, too. All the shows are ones that have never been done at Liberty before — and two are first-timers for the Central Virginia area: Hairspray and The Phantom of the Opera. Liberty is the first college to get permission to perform these shows.

Cooper said the new theater will be a chance for even more of the Lynchburg community to see the talent of Liberty’s award-winning theater students.

“In the past, people have had to be put on a waiting list to see a show — and now we won’t have that problem. There’s plenty of seats for every show, and they’re all good seats.”