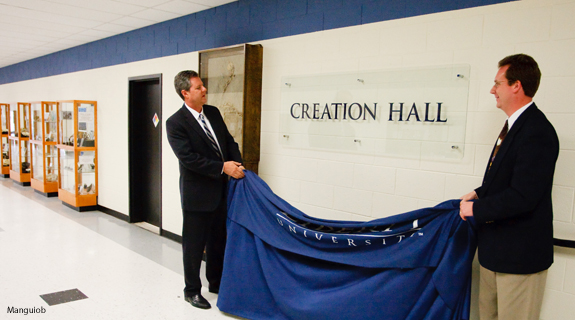 Today Liberty University students and faculty dedicated the Creation Hall Museum, located in the back hallway of the Arthur S. DeMoss Learning Center, Liberty’s main academic building. The unveiling of the museum coincides with the 25th anniversary of Liberty’s Center for Creation Studies and displays relics that had long been in storage due to lack of space on campus.

Although the DeMoss hallway may seem like an unlikely location for a museum, it gives students a live format for the subject matter being taught in the classroom. Students can now view fossils and artifacts up close while learning how to defend their belief system.

“The Creation Hall Museum is an excellent addition to Liberty University. Our students will be able to get a firsthand look at fossils and some of the evidences for Biblical Creation,” said Dr. David DeWitt, director of Liberty’s Center for Creation Studies. “In class, the students see slides and pictures, but now they can see the fossils and models in 3-D. It will help the material to come alive.”

Among the many artifacts displayed are a replica skull and arm of an Allosaurus, a real mammoth tusk, fossil Allosaur ribs and a fossil of a large dinosaur thigh bone.

DeWitt, Chancellor Jerry Falwell, Jr. and the Rev. Jonathan Falwell, senior pastor of Thomas Road Baptist Church, spoke about what it means for students and the LU community to maintain and uphold our beliefs in creation.

“This is something that is part of Liberty University’s core values,” Jerry Falwell, Jr. said, personally thanking DeWitt for his commitment to constructing the museum. 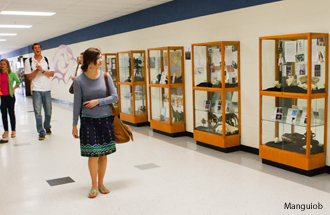 Beyond the artifacts, the public museum proudly displays Liberty’s stance on creationism.

“Let this be another opportunity to stand up for the truth,” Jonathan Falwell said, “[Liberty University] will always hold to the truth accounted in Genesis.”