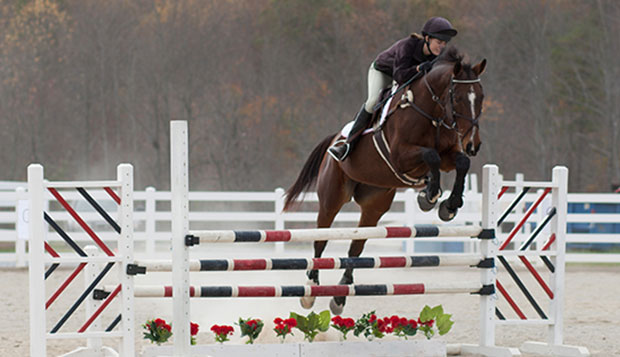 As barn manager for Liberty University’s Equestrian Center, Caroline Trexler and her staff have their hands full tending to the 15 horses and a menagerie of other animals that reside there.

Starting this semester, she will be even busier as head coach of Liberty’s women’s equestrian team, the newest addition to the rapidly growing Club Sports program.

“I am so excited,” said Trexler, a graduate of Towson University in Maryland who has worked at the Liberty Equestrian Center since it opened in 2011. “It’s definitely something students have been inquiring about for a while and we are really looking forward to it.”

Equestrian brings the total number of programs offered by Liberty Club Sports to 32 — 17 men’s and 15 women’s teams — for this coming school year.

“We’re excited to work with Caroline in starting the new program,” Liberty Director of Club Sports Kirk Handy said. “We believe she has a great vision for the women’s equestrian program at Liberty University.”

“It will be a challenge, but having talented competition like that provides the opportunity to get better,” Trexler said. “The team will be on a small scale initially, but when Liberty adds a club sport, they intend for it to be successful.”

The bucolic equestrian center itself was another factor, located on a 270-acre tract of land on Liberty’s mountain property in Campbell County, about a 10-minute drive from campus beyond the Liberty Mountain Snowflex Centre. It features an eight-stall stable, which could expand to as many as 48 stalls in the future, and a 150-by-160-foot outdoor ring among other amenities.

“Our ring was designed by Bob Kiser of Kiser Arena Specialists (based in Texas), who builds rings around the world for events such as the World Equestrian Games and FEI World Cup,” Trexler said. “It is a spectacular ring. In the future, as we expand, it will be a big benefit as we look to host shows.”

“That won’t necessarily be a disadvantage,” Trexler said. “Some of our girls are able to bring their horses to school and board at the facility, while others ride or take lessons on Liberty’s horses. IHSA provides the opportunity for all of these students to compete on a level playing field, regardless of their status of horse ownership or experience level.”

This past year, Trexler along with her assistant and four student workers provided nearly 500 rides for Liberty students and staff members. She will have more hands on deck to lessen the load starting this fall. By the time the semester starts on Aug. 19, Trexler will have two part-time staff members and six student workers available for day-to-day horse care, teaching lessons, and assisting with events such as Student Activities’ Fall Festival, set for Oct. 26.

“She has experience on the A circuit and as a hunter/jumper coach since the late 1970s,” Trexler said. “I was born in the ’80s.”