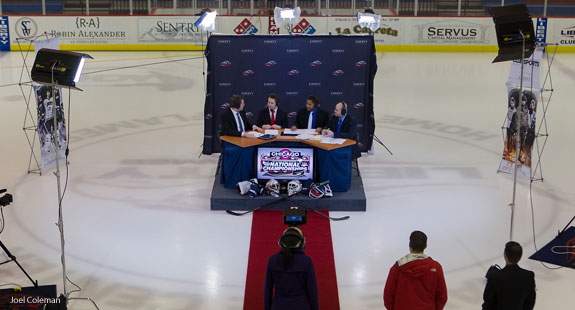 The eyes of the American Collegiate Hockey Association were on Liberty University Wednesday night when student broadcasters from the School of Communication announced the 17th Division I poll and pairings for the March 1-6 National Tournament in Chicago live from the LaHaye Ice Center.

It was the first time the ACHA has offered a live reveal webcast, produced in the same format as an NCAA basketball tournament pairings selection show.

"It was a terrific-looking broadcast, and the talent on camera and those behind the cameras were all top-notch," said Chris Ostrander, ACHA public relations director. "I can't say enough about the research and legwork the team put forth and it showed during the entire show … Liberty clearly hit a home run with this." 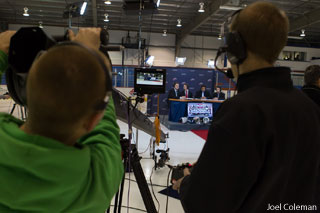 Ostrander added he was impressed with the level of professionalism from Liberty's staff.

"From the first time we all began discussing how to put this together right up through the broadcast, it was a professional, well-run production."

He said he hopes the show will become an annual event for all five of the ACHA divisions (men's DI, DII, and DIII and women's DI and DII) and plans to keep Liberty on his short list for future productions.

"It is an exciting opportunity to be able to expand the presence we have as a nationwide organization and (productions) like this will definitely continue to illustrate the standard we hope to set."

Rett McGibbon, a Liberty graduate and former Division III men's coach, served as host of the show, with the booth set up on center ice surrounded by lights and cameras showcasing a Liberty University backdrop and National Championship-Chicago banner in the foreground. The panel of broadcasters included Brandon Cockburn, the leading scorer on Liberty's DIII hockey team; Patrick Strawn; Devan Mello; and Jacob Johnston, with Aubrey Hiddema announcing the first- and second-round matchups as well as the top four teams receiving byes through to the quarterfinals.

The Flames (21-13-2) earned the No. 13 spot, meaning they must play a first-round game against No. 20 John Carroll University (28-3-1), which received an automatic bid as College Hockey Mid-America champions, on the tournament's opening day.

"Whether it was 12 or 13, we really weren't sure," said Liberty assistant coach Jeff Boettger. "In the end, you have to win every game, so whether you start in the play-in round or you start in the second game, it doesn't matter. I think it actually may play as a benefit for us just to get a game in and get warmed up." 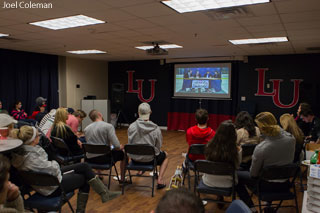 Junior forward Andrew McCombe is looking forward to being a favorite in the first round, if for no other reason than a shot at redemption after losing to Adrian, the No. 1 team for the fourth consecutive poll. Last year, ranked No. 11, Adrian upset the sixth-ranked Flames in the second round of nationals.

"To be honest, I kind of like the idea of playing a first-round game," he said. "We got there last year and played a first tough (second-round) game against Adrian and I think we got surprised a little bit, taken off guard. They took it to us. But I'm excited about playing a first-round game, going in and just getting momentum. It's always nice to kind of get your feet wet and play a game, so it will be good."

Liberty's not overlooking John Carroll, which moved to No. 23 in the final ACHA ranking after debuting at No. 25 in last week's poll. John Carroll was bumped to the No. 20 spot in the tournament because of its automatic bid.

"I don't think we've ever played them, but you certainly don't take any team for granted," McCombe said. "You don't underestimate any team because any team could beat any team on any night."

Injuries have plagued the Flames in the second half of the season, but they hope to use the next two-and-a-half weeks to heal and get rested and ready for a deep run in the national tournament.

"We'll hopefully get some guys back," McCombe said. "We've got a couple guys that are borderline to be ready to come back. Just practice the next couple weeks, go in with some confidence and just have fun with it."

With a victory over Carroll, the Flames would advance to face Ohio (24-7-3) — a team they split two games with at LaHaye last semester when the Bobcats were the No. 1 team — in the second round on March 2.

"They're a very good team," McCombe said. "You certainly have to work extremely hard to beat them. The biggest thing is we're just going to have a lot of fun with it. If you get to that game, it's always fun to play a team like that."

In the quarterfinals, top-seeded Adrian will face the winner between Stony Brook and Rhode Island; No. 2 Arizona State awaits the winner between Navy and Rutgers, and No. 3 Minot State will take on the Central Oklahoma-Navy winner.

*Advanced to No. 20 in the tournament due to an automatic bid