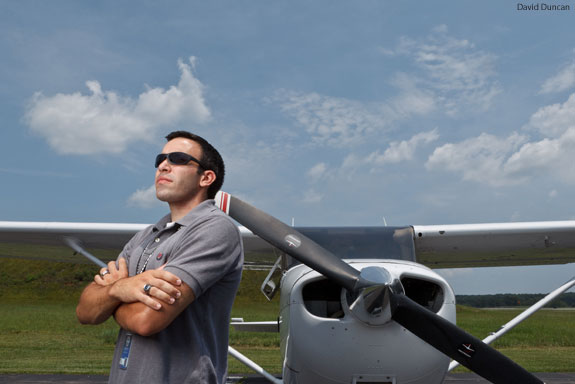 Liberty University School of Aeronautics graduate Daniel Wickham knew what he wanted to do at a young age.

Wickham, 22, a native of Roanoke, Va., completed the requirements for his degree in Military Aviation in July and will see his childhood dream come true when he reports for duty at Columbus Air Force Base, Miss., in October. The dream actually started to become reality this week when he was commissioned as a second lieutenant in the U.S. Air Force. 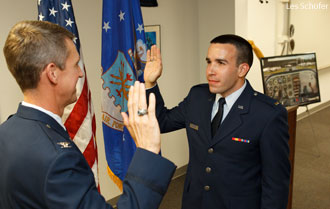 The ceremony took place at Liberty’s Aviation Academics Building on Monday, July 30. Wickham would have been commissioned with eight fellow officers of Liberty’s U.S. Air Force ROTC Detachment 890 in May, but the Air Force discovered a medical condition that required immediate attention. It was a setback in his career plan, but with support from his aviation professors and ROTC staff, Wickham learned valuable lessons that weren’t part of the everyday curriculum.

One year ago, Wickham’s career plan was on track. With three years of experience in Air Force ROTC (and two in Junior ROTC in high school) and with one more year left to earn his aeronautics degree, he was poised to be a top choice to receive a pilot slot in the U.S. Air Force upon graduation. He underwent his required physical at Wright-Patterson Air Force Base in Ohio — and then his plan stalled. His EKG had discovered a heart condition.

“If I did not have surgery, I would have lost my pilot slot and possibly my career,” he said.

It wasn’t a hard question for him to answer — he knew he wanted to serve as a pilot and he knew he didn’t want to take the risk with his health. Although he was in top physical shape, the condition (Wolff-Parkinson-White Syndrome, where a person has extra nerves sending an impulse to pump the heart rather than the nerve that is supposed to perform that function) was dangerous, he said, “because if those nerves decide not to work anymore or not function properly, it could send me into cardiac arrest, or possibly stop my heart, reverse my heart, and kill me. Especially with the Air Force, they don’t want anyone flying multi-million dollar jets and that happen.”

It was a decision that brought back memories, too. When he was 14, a close cousin his same age, died suddenly from a heart condition.

“As soon as I found out I had a heart issue, those thoughts immediately starting coming back to me, he was almost like a brother to me,” Wickham said.

He received the surgery at a hospital near his home one month later. His recovery went well, but the FAA suspended his pilot license for seven months, which meant he had to postpone graduation.

“I couldn’t do any flying — that put me behind in everything,” he said.

But the waiting was worth it.

“I think definitely God had a plan — it kind of threw me off my plan a little bit, but that is His humor in it. It’s frustrating for us often, but when I look back on it, I say (to God), ‘I knew it was all you; I knew you were doing something there.’ I was just impatient.”

Wickham said the constant encouragement he received from his professors spurred him on. One of them, U.S. Air Force Col. John Marselus (Ret.), also an associate dean at the School of Aeronautics, commissioned him on Monday. Marselus said he was honored to be a part of Wickham’s ceremony.

“He'll be taking the mantle of leadership for the next generation of men and women who will stand firm for the line of liberty for all freedom-loving people — worldwide. We are only as strong as the next generation that's willing to sacrifice for the good of our great nation,” Marselus said.

Wickham called Marselus a personal friend and mentor. He had the honor of coordinating Marselus’ retirement ceremony at Liberty over a year ago.

Wickham said he is glad to be able to start a career that aligns with all of his passions, and is grateful to Liberty for giving him the skills and resources he needs.

“Between the aviation program and ROTC, I have been well-prepared for my future. ROTC has sent me in the right direction, has put me on track for my career in the Air Force, especially getting into pilot training. What I’ve learned so far at Liberty has really put me leaps and bounds ahead of anyone who is coming in without any flying experience at all. I will be able to stand out in the crowd and be an outfront leader.”