Ministries work together to accommodate growth 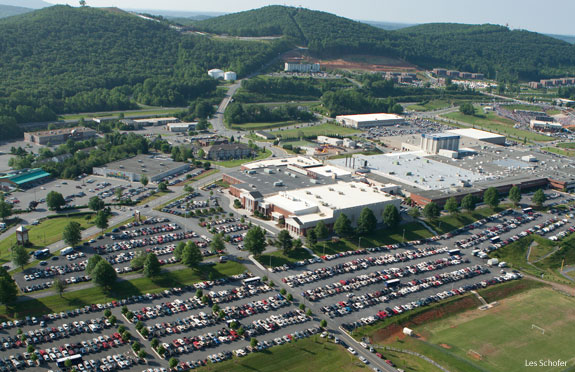 Just 841 acres in Lynchburg, Va., is home to the world’s largest Christian university, the nation’s eighth-largest private school and one of the 20 largest churches in America – all just steps away from each other.

On any weekday, more than 17,000 students and employees are on the Liberty University campus while hundreds of people are involved in ministries at Thomas Road Baptist Church and 2,000 preschool though 12th grade students are attending Liberty Christian Academy.

“It’s a unique mix of organizations that probably exists nowhere else in the world,” said Liberty University Chancellor and President Jerry Falwell, Jr.

Although all three Christ-centered institutions carry out unique day-to-day operations, all have worked together to accomplish the stated vision of the late Rev. Jerry Falwell, Sr., who founded the church in 1956, Liberty Christian Academy in 1967, and Liberty University in 1971. His vision was to have a unified body of believers on one functioning campus.

Falwell Sr., who died in 2007, never anticipated the type of explosive growth that the three institutions have experienced in the past decade, particularly during the last five years.

Liberty’s resident enrollment has grown from 9,500 in 2006 to more than 12,500 today. That’s not including the 65,000 students enrolled in the University’s online program, which requires hundreds of on-campus employees to serve as support staff.

Falwell Jr. has outlined goals that would push Liberty’s residential student body to 20,000 and its online enrollment to 80,000.

“He had a great big vision that the ministries would grow and would get to the point where we’re truly having global impact — and that’s happening in all three organizations,”  said the Rev. Jonathan Falwell, senior pastor at TRBC. "It is all a result of his prayers, his efforts, his leadership. All of us -- John Patterson [LCA superintendent], Jerry Jr., me -- we are all nothing more than stewards in helping to continue to carry on the vision that God laid on Dad’s heart."

Liberty, TRBC and LCA all operate out of the 1 million-square-foot former Ericsson building, donated to the ministries in 2004 with property that encompasses 113 acres. The church built and renovated at the north end, starting classes at LCA in fall 2005 and holding the first church service in July 2006. Liberty now uses its portion of the building (called Green Hall) for administration, student services and student recreation, as well as the Tower Theater and Liberty University School of Law.

Though the donation of the property was deemed a blessing and was adequate at the time, growth within the organizations has required a careful, coordinated -- and prayerful -- effort from each of its leaders to find creative solutions to share the space.

“There are some challenges that come along with it, from a standpoint of trying to do infinite ministry in a finite space,” Jonathan Falwell said.

The leaders have worked for more than a year to determine the best use of space to meet each ministry’s needs.

“It’s in a tight space, but yet we’ve found a way to accommodate each other and to keep everything running smoothly,” said Jerry Falwell, Jr.

This summer, several physical changes became obvious to members of each organization, as parking lots and areas within the building were sectioned off.

“We work together, we’re sister organizations, but we have to respect the identity and unique missions of each entity,” said Jerry Falwell, Jr.

“It’s part of our plan to make main campus the core academic campus,” Falwell, Jr. said. “It was all part of a broader strategy and it worked well.”

“It was a coordinated plan, took a lot of ingenuity on the LCA superintendent’s part, a lot of fast thinking, a lot of incredibly fast moves. It really is a textbook case of cooperation more than anything else,” Falwell, Jr. said.

Liberty also built new parking spaces at the south end of the building for employees who worked in Green Hall, freeing up space in the parking lots closest to the church and LCA. With the safety and security of its students a top priority for LCA, this made perfect sense. The pick-up and drop-off points for students is working much better, said John Patterson, LCA superintendent.

“Not only did we get guidance from Liberty, they offered resources to help us put it in place,” he said. “There’s a real flavor of camaraderie on this campus that I really appreciate.”

The changes benefit the church as well. With hundreds of people attending Bible studies and special events there throughout the year, the parking was needed.

“It’s been a triple effort on all three entities over the last year -- to determine the best way to make sure every single one of our organizations are able to competently and successfully carry out our various areas of ministry,” Jonathan Falwell said. “At times it can be challenging, but I think we’re making some great strides and we’re doing some things now that, after a few weeks of everyone settling in, I think is going to be very positive, and we’ll see some great opportunity for even some further ministry and further growth.”

Chancellor Falwell said by putting in some appropriate barriers between the church and university offices, the church could still remain open to the public while Liberty’s student records would remain in private offices.

The organizations will continue to work together to provide access to one another’s facilities. For example, Liberty’s swimming pool in the LaHaye Student Union will be used by LCA’s new swim team this winter. LCA also has access to Liberty’s athletics facilities as well, for an agreed-upon rental fee that satisfies NCAA regulations.

The church will be making use of Liberty’s new conference center in Candler’s Station shopping center on nights and weekends, which is primarily used during the day for intensives for Liberty University Online students.

Chancellor Falwell said changes have also been made to impact Liberty students on a spiritual level, including cancelling Sunday morning Campus Church in the Vines Center and encouraging students to attend a new service on Sunday nights at TRBC.

“I thought students would benefit more from attending an actual church service at a local church,” Falwell, Jr. said. “TRBC started the TR SIX:THIRTY service for that reason.”

He said the Southern Association of Colleges and Schools (SACS), Liberty’s accrediting body, requires universities to be independent, “to operate without influence from outside organizations, so we’re doing that without sacrificing the spiritual input of the church.”

He said last spring he asked all of Liberty’s campus pastors to attend TRBC pastoral meetings to get mentoring, leadership and guidance from the church.

“We have a wonderful partnership,” he said. “Everything here came from the same foundation, the same mission, and that will not change.”