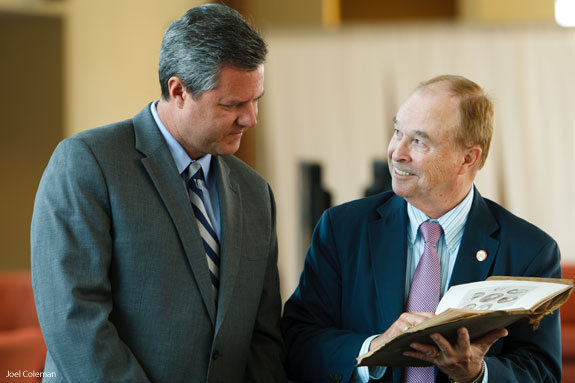 Liberty University hasn’t even existed a half-century, but a 104-year-old keepsake found in its archives recently holds much value to a neighboring college.

Falwell said the book was found in some boxes at the Jerry Falwell Museum, currently housed in Arthur S. DeMoss Learning Center.

“I want to make this a gift from Liberty to Lynchburg College,” he said.

Garren said the copy is of LC’s oldest yearbook. It is their third copy and is in the best condition. He said he appreciated Liberty’s cooperation and support throughout the years.

He told Falwell, “I remember in my first year, about 10 years ago, coming to Lynchburg and meeting your Dad and him showing me around, how kind he was to me when I was here, and I appreciate your kindness and the work we do together.”

Lynchburg College was founded as Virginia Christian College in 1903.

The Town and Gown meeting is a quarterly gathering of city leaders and administrators from the city’s colleges.