Researchers take on project to save salamander population

As amphibian populations across the planet are dwindling due to the deadly chytrid fungus, a team of Liberty University researchers is working to discover a solution to preserving salamander species.

Interestingly, salamanders in the eastern United States, including the Blue Ridge Mountains which roll through Central Virginia, are largely resistant to the chytrid fungus.

“Some of the bacteria on their skin have the ability to kill the pathogen that is trying to harm them,” explained Dr. Matthew Becker, a professor in Liberty’s Department of Biology & Chemistry. Becker has been researching this unique ability for over a decade. “We are studying the microbes on the skin to identify the bacteria that can kill the fungus so we can better understand which amphibians are susceptible (to infection) and why, hoping to find some patterns.”

He leads a team of undergraduate researchers on a project that is funded in part by the Virginia Herpetological Society (VHS) and Liberty’s Center for Research & Scholarship. 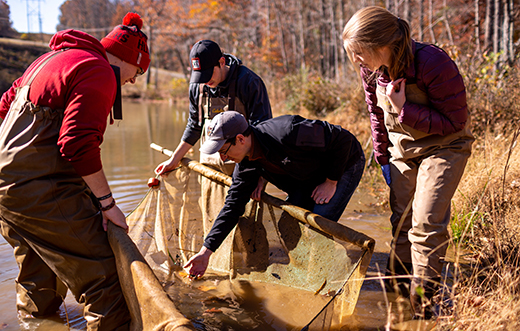 The Peaks of Otter — three mountain peaks in the Blue Ridge Mountains about 45 minutes from Liberty — are home to about 10 species of salamander. Becker plans to study all of them, one-by-one, to learn more about their interactions with the bacteria that naturally occurs in their environment and on their skin. The research could lead to the creation of probiotics to help affected populations battle the pathogen.

“The end goal is conservation,” Becker said, “to figure out why our amphibians are OK so we can we help these other amphibians that aren’t.”

His students are currently collecting DNA samples from the seal and dusky salamanders and then isolating and identifying bacteria in a lab. They are also seining the lake at the Hydaway Outdoor Recreation Center on Liberty Mountain to catch eastern newts. DNA samples are collected and data is recorded about the animals and their environment to measure any long-term population impacts of the fungal pathogen.

Senior Cat Read, a biomedical sciences student, said the research experience is key to her future plans, as she intends to go to medical school and conduct biomedical research. 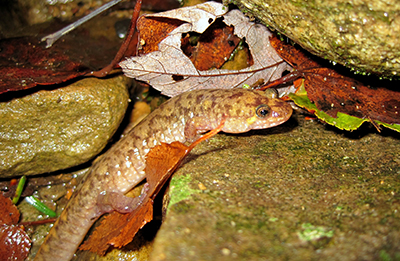 “I have learned a lot of techniques — how to do polymerase chain reaction (PCR), which allows us to amplify the DNA in a lab and then use it for experiments,” Read said. “I have also learned how to isolate and sequence DNA.”

She said that although medical schools expect to see research experience on an application, the level of work she is doing exceeds that expectation.

“Very few undergrad students get to do the work we get to do,” she said. “It’s so hands-on. I’ve gotten to lead a team of researchers, I’ve been able to be in the lab and develop my own protocols, I’ve written new ways to do some of these things, so that is invaluable and puts me at a significant advantage.”

She said the work also builds her faith.

“I have realized how much research tells us and how valuable it is to innovation — whether it be in animal conservation or surgery,” she said. “I have realized how it really does have the power to change the world. For me, it is a form of worship to God because it is learning about the world and the way the Lord created it, and I think that is the most beautiful thing we can do.”

“Research has opened doors to so many opportunities,” Duggins said. “Not only have I been able to learn valuable skills within the laboratory setting, but I have been able to speak at different conferences and get my name out into the scientific community. It has helped me substantially in how I communicate.”