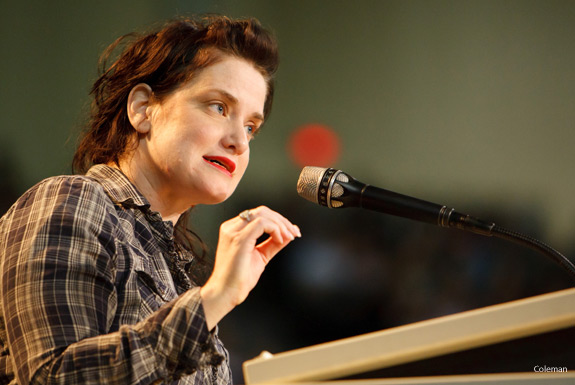 Abortion survivor Gianna Jessen shared her incredible testimony and spoke out against abortion in an uplifting message to Liberty University students at Monday’s convocation.

Jessen weighed only two pounds when she was born at a Los Angeles abortion clinic after her 17-year-old biological mother chose to have a late-term saline abortion.

“My medical records, for the skeptics, literally say ‘born alive during saline abortion,’ “ Jessen said. “My birth certificate is signed by an abortionist — ha! The Lord of Hosts makes him sign my birth certificate just to acknowledge my life! That is the warrior heart of God.”

A lack of oxygen to her brain caused by the abortion gave Jessen what she sincerely refers to as “the gift of cerebral palsy.” She was placed with her foster mother, a woman she calls “the Queen,” at 17 months old. Doctors predicted that Jessen would never be able to hold up her own head or sit by herself, let alone walk. However, Jessen’s foster mother worked with her daily and Jessen was able to walk at three-and-a-half years old with the help of a walker and leg braces.

Since then, Jessen has completed two marathons. She has also spoken before Congress several times, had her testimony read in a U.S. Supreme Court case, been featured internationally in the media and authored a book, “Gianna: Aborted…and Lived to Tell About It,” which was published in January.

Jessen said she speaks in such graphic detail about abortion because she continues to be amazed by how many people still do not fully understand how abortions are performed and the moral issues it involves.

“The abortion industry is not run for the sake and welfare of women but in fact for money,” Jessen said. “If abortion is about women’s rights, then where were mine?”

She urged students to get involved with the pro-life movement and to stay informed about political issues involving abortion. She unapologetically argued her case against abortion and euthanasia by reminding students how much value handicapped and elderly people have in society.

“Sometimes there are things we can only learn from the weakest among us and it is our loss when we remove them from our society. There is a light they carry that is unexplainable, that is given from God, and it is their sermon to the world,” she said.