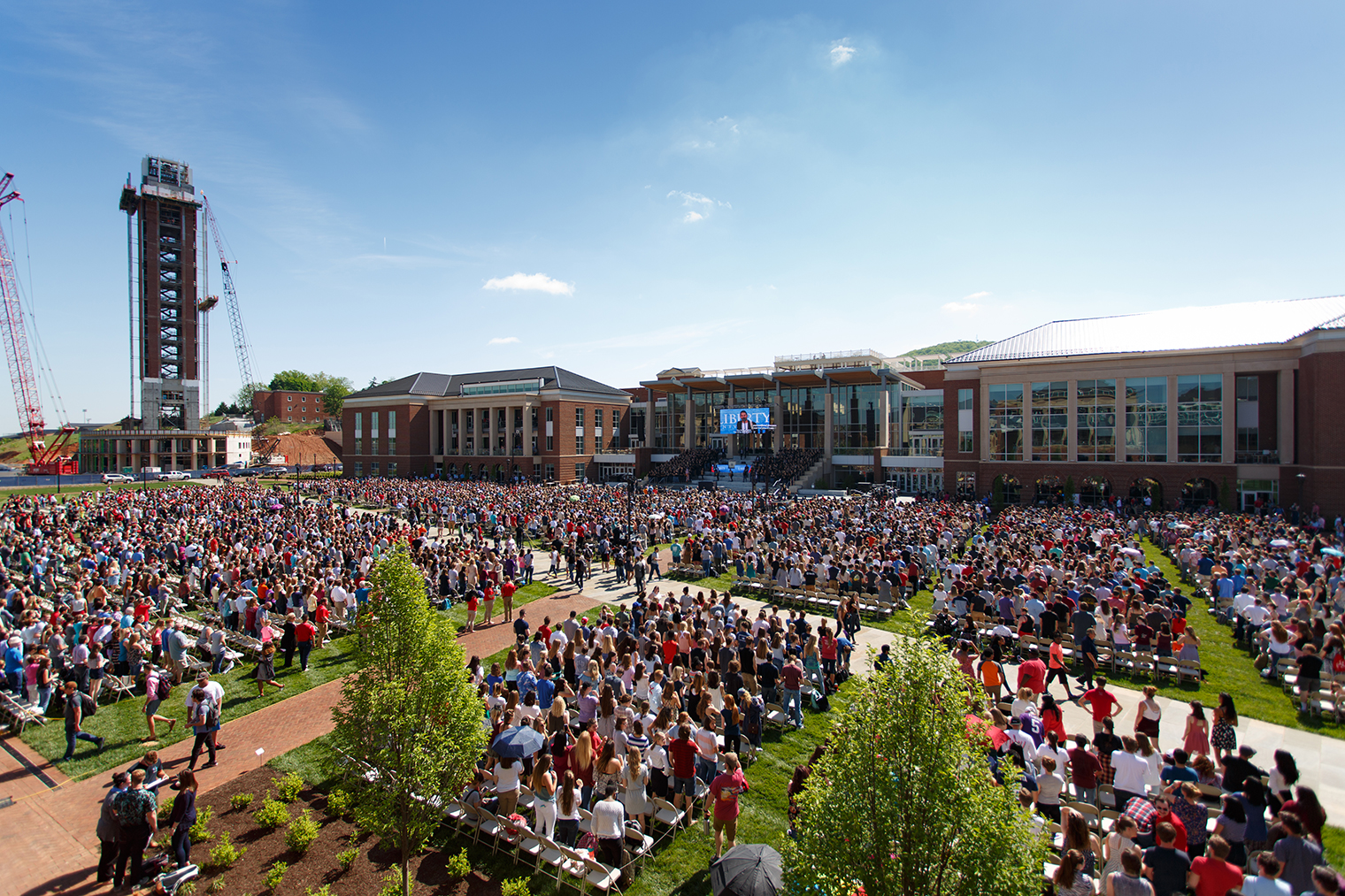 The back steps of the Montview Student Union were transformed into the Liberty University Convocation stage as students, faculty, and staff gathered for the final Convocation of the year on Friday. It was the first time in decades that the event had been held outdoors.

Students from the School of Music shared the stage with the Liberty Worship Collective as they led the crowd in renditions of “Go Tell It on the Mountain” and “Amazing Grace.”

President Jerry Falwell started off the event by talking about the history of the early days of Convocation. He recounted how students would meet in a giant tent for chapel service and for some classes — before DeMoss Hall was built.

“We’ve come a long way since those days, and it’s wonderful to do this,” he said.

Falwell also recognized members of the university’s Board of Trustees, who were visiting campus for their semiannual meeting. He paid a special tribute to Tim Lee, a longtime board member whose granddaughter, Ally Hooten, died in a four-wheeler accident in January. Hooten would have been a student at Liberty this fall. Falwell’s wife, Becki, presented flowers to Lee, and balloons were released in his granddaughter's honor.

President Falwell then read the words from an inspirational speech by former Green Bay Packers Coach Vince Lombardi about winning in life. Falwell said that while he was growing up, his father, the late Dr. Jerry Falwell, displayed a framed copy of the speech in his office.

Two board members who are also Liberty alumni addressed the students, sharing stories from their time at Liberty and encouraging them as the academic year comes to a close.

William Graham (’97) shared advice that he learned from his grandfather, the Rev. Billy Graham.

“Time is your most precious resource,” he said. “Use every minute; use every second of your life for the purpose and the glory of Jesus Christ. You will never regret it. There’s a lot of things I regret in life that I wish I could do over again, but I can’t. But when I’ve served the Lord Jesus Christ and served Him faithfully, I’ve never wasted a second in my life.”

Steve Snyder (’82) said he was excited to be with the students, especially in a place where he could see the dreams that he heard so much about as a student coming to fruition.

“There’s nothing more exciting than when we get to interact with you, the students, and hear your stories of how you wound up at Liberty and what your passions are,” Snyder said. “That’s the purpose of this school. The buildings and the grounds and the equipment, those are tools.”

He said what God has been able to do on the campus over the last 40 years has been incredible.

“This is a story that started with this vision that a preacher in Lynchburg, Virginia, of all places, had to build a university that trained Champions for Christ,” Snyder said. 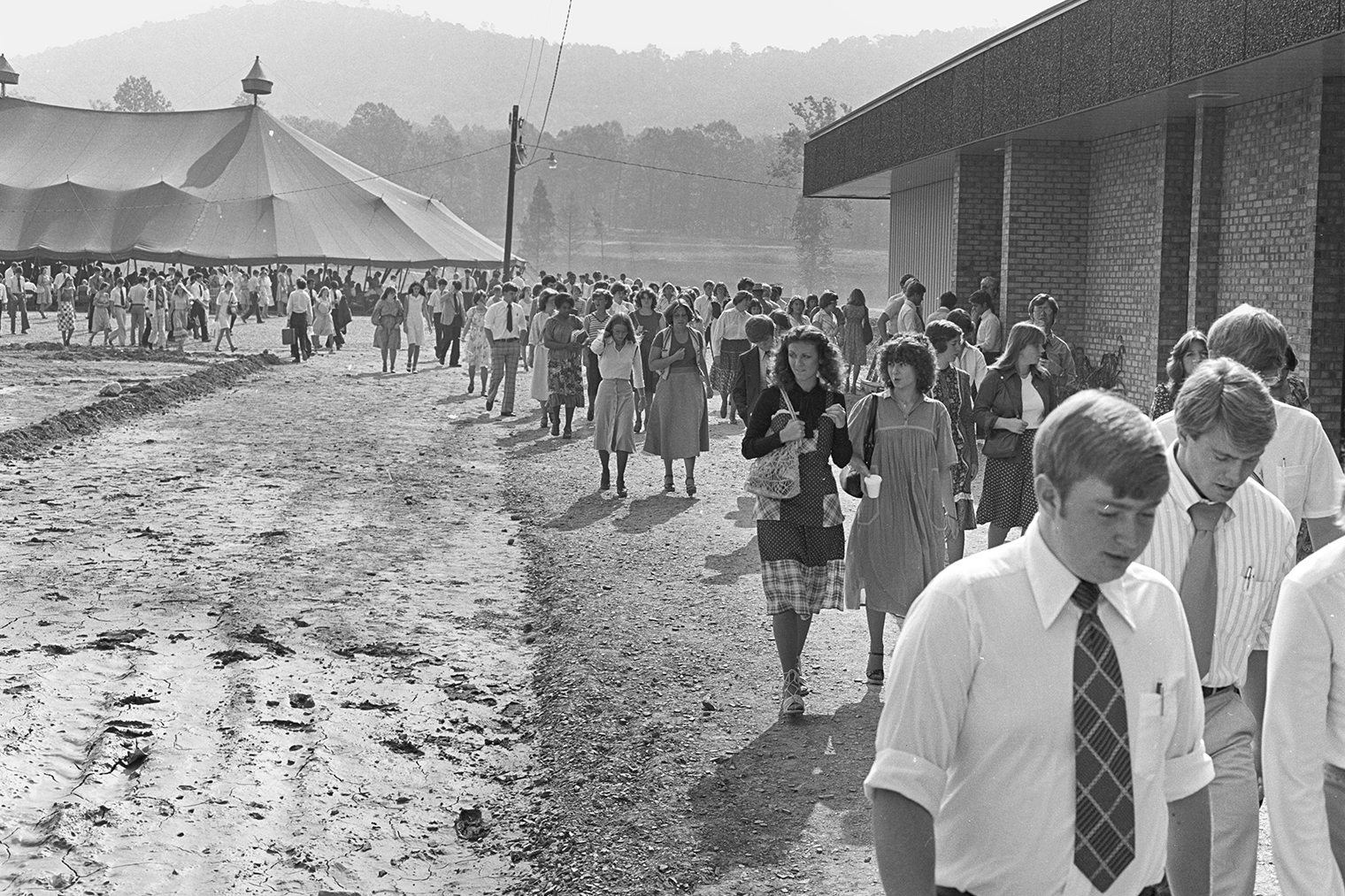 Though Snyder said in the early days that there were a lot of questions about whether the school would survive, his visit on Friday was another chance to see that the campus is anointed by God.

“You don’t explain this without looking to the Source because God put all of this here,” he said. “None of you are here by accident. This not a mistake, and we all get to be part of this story.”

In a historical moment at the end of Convocation, the university’s replica of the Liberty Bell, which was mounted into place on top of the new Freedom Tower on Thursday, rang 71 times in honor of the year Liberty was founded.