On Saturday, Liberty University President Jerry Falwell shared a eulogy at the funeral of his friend and longtime Liberty supporter Worth Harris Carter, Jr., who died on April 7 at age 79. The funeral was held at Thomas Road Baptist Church. 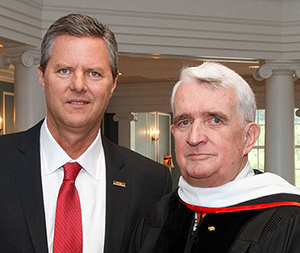 Falwell shared how Carter supported Liberty when no other banker would, in the formative years when the university struggled to get by. He recalled a car ride in 1988 with Carter and his father, Liberty founder Dr. Jerry Falwell, who was giving him a tour of Liberty’s property. It was their first meeting with Carter, who caught the vision to build a world-class university and offered to loan them $4 million.

“We about fell out of that car, we couldn’t believe it,” President Falwell recalled.

Carter continued to support Liberty over the years, Falwell said.

“Over and over he was the right person in the right place at the right time when nobody else would believe in this university,” Falwell said.

On a personal level, Carter was his mentor.

“He was so humble,” Falwell said. “I learned so much from him as a young attorney, a young businessperson here being groomed to be the president of Liberty University. I can’t think of anybody I learned more from than Worth Carter about business and about how finances work. He was about as close as family can be without being family.”

Falwell said Carter was so proud to see the vision fulfilled at Liberty. And for his part, Carter did not seek public recognition, though Falwell managed to honor him on stage at Commencement in 2012, when he presented Carter with an honorary doctorate.

Describing Carter as “a great, great, great businessman” with “incredible instincts,” Justice explained how Carter only invested in people he believed in and knew he could rely on.

Carter wasn’t afraid to share the truth straight if a business opportunity did not look good, said Justice, who himself had endured tough deals and great successes, including a large agriculture business. He said Carter was with him at every turn.

“We grew together,” Justice said. “I knew I could count on him, and always did.”

Worth Harris Carter, Jr., a longtime friend and supporter of Liberty University, died on April 7 at age 79.

Beginning his career as a cashier, Carter put himself through college and two years of law school before founding a bank from scratch in 1973. From that venture, he went on to build Carter Bank and Trust, a $4.5 billion company with hundreds of branches across Virginia and North Carolina.

“He planted the seeds for everything you see here (on campus),” Falwell said.

"I was deeply saddened to hear of the passing of Worth Carter, Jr. He was a dear friend of mine and of my father. He will be terribly missed by the Liberty University community and by his many friends and associates across the mid-Atlantic. Worth was a legend in the banking business, offering entrepreneurs and citizens a customer-friendly alternative to the big, bureaucratic banks. Countless businesses would not exist across Virginia and North Carolina but for the genius of Worth Carter in recognizing the solid business plans and the good character of many folks who didn’t fit the mold imposed by big banks. I can attest to the fact that Liberty University would not have survived the financial struggles it faced in the 1990s if Worth Carter had not believed in the school and the incredible potential that it had. His willingness to loan to Liberty when the big banks all said no was key to Liberty stabilizing its finances and growing to become one of the most successful and prosperous universities in the nation. Because Worth Carter’s first priority was to serve and fulfill the needs of his customers, his bank prospered in unprecedented ways, from its founding in 1973 to its position today as one of the largest Virginia-based banks. Worth Carter gave his customers every chance to succeed through difficult times and prosperous times.  He worked harder than anyone I knew, was down to earth, impeccably honest, and spent the last few years of his life successfully fighting to keep his style of community banking alive in the face of new, overly burdensome and costly federal regulations that hurt small banks, entrepreneurs and small businesses. Worth Carter’s passing marks the end of an era in Virginia’s banking history."

In 2012, Falwell presented Carter with an honorary Doctor of Business degree at the university’s 39th Commencement.