Class of 2020 moves in, setting record for campus population and academic achievement 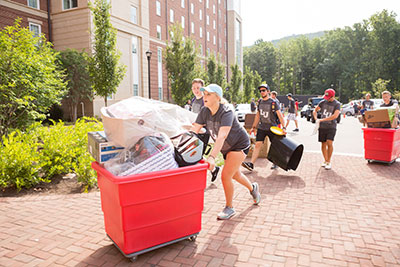 New students and their families are met with a chorus of cheers as Liberty University student leaders welcome them to their college home. Cars are unloaded almost as quickly as they arrive at the residence halls, with eager upperclassmen loading belongings into wheeled red bins and whisking them along to the rooms.

“It is a well-oiled machine,” said Jerry Valentini of Philadelphia after helping his son Joey move into Residential Commons I on Wednesday. “The kids are so friendly. This has all been very well done.”

New students will continue to move in on Thursday, with residence halls opening to returning students on Friday. Residential classes begin on Monday.

The Valentinis said they didn’t know what to expect when they arrived and were surprised by how efficient the process was, especially with so many students moving in on such a large campus. They appreciated receiving a warm greeting and so many helping hands. 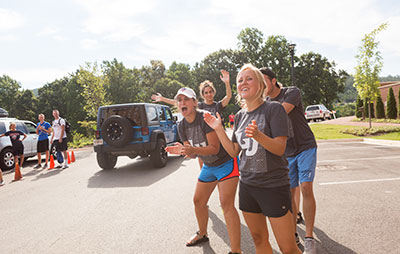 As new students continued to pour in on Wednesday, the joy of the student leaders did not wane, even with lunchtime approaching. The cheers were as enthusiastic as ever. And while move-in day might sound like a bit of a chore, the work was supplemented by plenty of fun as students threw footballs in the grass or jammed out to their favorite tunes in the parking lot.

As a transfer student, sophomore Sarah Preble of Charlotte, N.C., was also surprised by how easy the move-in process was.

“It is a lot easier to get in and get everything done,” Preble said. “Everyone has been very helpful and working to make it very easy, very smooth.”

Her mother, Susan, added that “the bins are genius.”

Welcome Week at Liberty includes orientation seminars, but also many opportunities for new students to acclimate to campus life. The annual Flames Kickoff, an energetic pep rally, will be held at Williams Stadium on Friday evening. Athletics Department leaders will introduce students to a number of campus traditions as they ignite the Flames spirit within the new class. Other activities throughout the week including karaoke, a movie night, and a scavenger hunt (visit the Student Activities page for the event schedule and the Admissions page for orientation information). After the first week of classes the semester will kick-off with a bang at Block Party, the annual carnival/concert held in the LaHaye parking lot. A fireworks show will cap the night on Saturday, Sept. 3, after plenty of games, rides, food, and live music from Colony House, Dave Barnes, and Vacation Manor.

Students will have the opportunity to explore their new, massive Montview Student Union, designed specifically for student life with a bowling alley, game rooms, open lounge areas, and a number of new dining options. 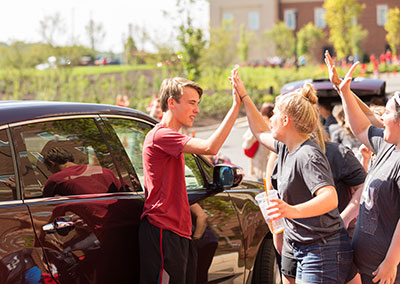 Liberty will welcome over 3,900 incoming students this fall; among them are about 2,400 freshmen and 1,300 transfer students. The total residential student population will rise to approximately 15,000 students — the highest in school history. Liberty also reaches another milestone with 8,100 students living on campus this semester.

With a growing emphasis on student research opportunities, Liberty continues to see the academic quality indicators rise among incoming classes. The Class of 2020 has the highest incoming GPA (3.49) and average SAT (1069) and ACT (23.8) scores in university history, as well as the most National Merit students (54), including a record 27 finalists.

Liberty also enjoys a diverse student body, representing over 80 countries and all 50 states. The incoming class hails from 47 different nations, with Korea, Canada, China, Nigeria, and Brazil having the highest numbers represented, after the United States. The top five states represented in the Class of 2020 are Virginia, North Carolina, Pennsylvania, Maryland, and Florida.

Incoming freshman Sydney Volosin came to Liberty from Visalia, California. Though Liberty was not even on her radar of potential colleges at first, after a campus visit she said she fell in love with the atmosphere.

“Everyone is just so nice and welcoming, I just felt at home,” she said.

Volosin looks forward to studying in the Department of Studio & Digital Arts and is impressed by how much of a commitment Liberty has made to providing world-class facilities and technological tools.

“Everything is so new,” she said.

Though her parents, Nick and Deborah Volosin, have plenty of emotions about their daughter living on the other side of the country, they said they are comforted in knowing that she has a strong support system here.

“It feels safe, it feels like an environment where people care,” Nick Volosin said.

“She is independent, we want to encourage that,” Deborah Volosin added, admitting it is a little scary having Sydney so far away. “When we stepped foot on campus, people were so nice and we were set at ease. … There is plenty for her to be involved in. We really love the idea of the Christian atmosphere, that her faith is going to be affirmed. We have a kid that is ready for an adventure.”