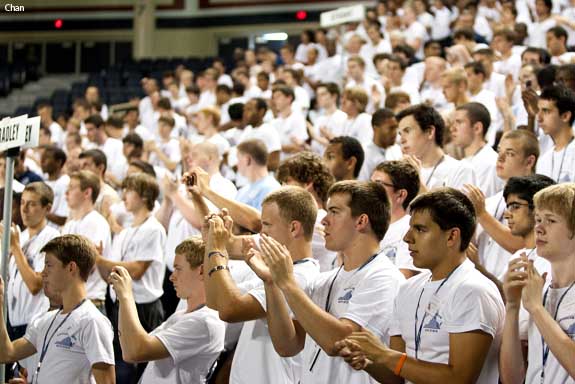 Virginia Gov. Bob McDonnell spoke at Liberty University today to almost 800 rising high school seniors for the 68th Session of Virginia Boys State. Boys State is an educational organization that teaches high school boys about local, county and state government. The sessions have been held on Liberty’s campus for 21 years.

While McDonnell has participated in Boys State at Liberty in the past, this was the first time he spoke as governor.

He addressed the students regarding the main functions of being the governor — his priorities being on creating jobs in the state, improving higher education and making Virginia “the energy capital of the East Coast.”

“The future of our country depends on doing what you’re doing this week,” he told the students. “It depends on you caring about your state and your nation and getting involved. Whether you are a Democrat or Libertarian or Republican, what’s more important is that you care about your country and you get involved … You need to hold your elected officials accountable.”

After his brief talk, he invited the students to a question-and-answer session, which he opened by saying, “Any question I get asked here is probably as tough as or tougher than any I’ve been asked by a reporter.”

McDonnell is one of several dignitaries to speak at this year’s Boys State, held June 20-26 at Liberty. Other guests include Virginia’s Lt. Gov. William Bolling, who spoke Wednesday, and Attorney General Ken Cuccinelli, who will speak Friday.