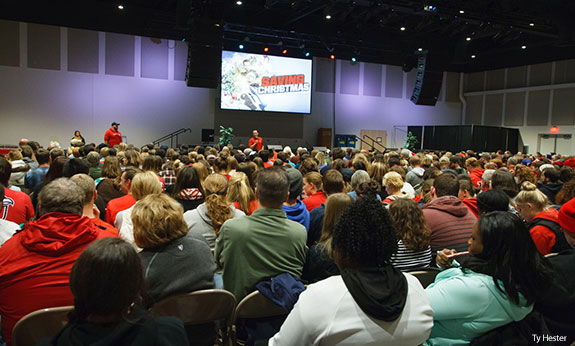 Liberty University kicked off the Christmas season early with an advance screening of Kirk Cameron’s “Saving Christmas,” which hits theaters on Nov. 14. Students and guests attending College For A Weekend (CFAW) packed the LaHaye Event Space to capacity for the free screening, enjoying cookies and candy canes with some even dressing in festive holiday apparel.

Liberty garnered the sneak peek due to its partnership with Cameron, who visits the university often, most recently in September to speak in Convocation about the upcoming film. Last year, Cameron hosted a live broadcast of “Unstoppable” in the Vines Center with more than 150,000 people viewing from 700 theaters nationwide. He has visited Liberty’s Cinematic Arts, Zaki Gordon Center and has lent his expertise to film students.

“Saving Christmas” seeks to help viewers reunite the sacred and secular elements of Christmas. In the light-hearted comedy, Christian (played by Darren Doane) sits down with Cameron to unpack his reservations about celebrating the holiday. Through the dialogue, audiences (along with Christian) learn the biblical basis for Christmas celebrations and gain the inspiration to stand strong as the culture looks to trivialize and eliminate the faith elements of this holy season. The family-friendly film will begin a limited two-week release on Friday in 400 theaters across the country. 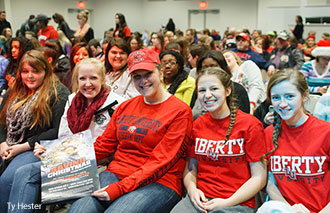 Liberty’s audience received the film warmly, erupting in laughter throughout the movie and applauding as the end credits began rolling. Many said they came out for a love for the Yuletide season.

“I love Christmas, and this seemed like a great way to start my Christmas season, it’s the first ‘Christmasy’ thing available,” said freshman Thomas Long, adding that Cameron’s Convocation message in September piqued his interest in the film.

Long said he enjoyed the film’s use of humor — particularly the “Dubstep (dancing) Santa” — and that it gave him a new perspective on the season.

“There was a lot of stuff that I had never really thought about before,” Long said. “There are a lot of people back home that are kind of legalistic about Christmas … I will try to take (the film’s message) back home.” 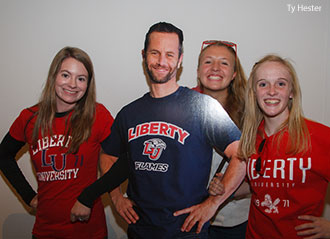 Sophomore Merritt Card also appreciated the humor, saying that it helped make the film more interesting, so that its important message resonated more deeply with audiences.

“I’ve heard the story of Saint Nick before, but not in so much detail,” he said. “I thought the message was great; I thought it was funny.”

Leah Colestock, a high school junior who was visiting for CFAW, said that she loves Christmas and the film gave her much to think about as the season approaches.

“It looked at a lot of things, like Santa and the Nativity, in ways that I really hadn’t before,” she said. “It made connections that were really deep.”