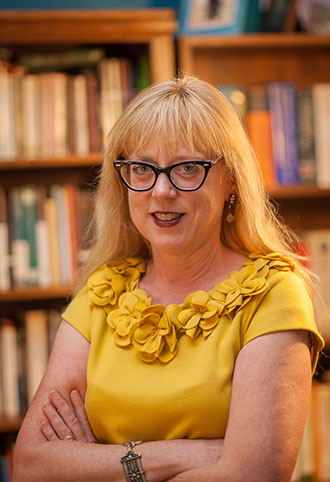 Liberty University Department of English & Modern Languages professor Dr. Karen Swallow Prior has been named as a Research Fellow in the new Research Institute launched by the Southern Baptist Convention’s Ethics and Religious Liberty Commission (ERLC).

“This invitation came as a complete surprise to me,” Prior explained. “I have been writing articles for the ERLC for the past year or so. I did not know about the launching of the institute until I was approached by the director.”

The ERLC, which represents the Southern Baptist Convention on matters of morality and public policy, launched the Research Institute as a vehicle to bring the Gospel into today’s most complex cultural and social issues. With world-class research work from scholars like Prior, ERLC hopes to see churches more effectively engage societal debates from a biblical worldview. The ERLC’s president, Dr. Russell Moore, spoke in Convocation last semester.

“Under Dr. Moore’s leadership the ERLC has become a respected and unifying voice in a fractured culture, a voice that applies biblical ethics in ways both faithful and nuanced, both orthodox and relevant,” Prior said. “It is an honor to be a part of the Institute.”

Moore shares Prior’s excitement over the launch of the group’s research wing. “I am thrilled to get to work together with an exceptionally gifted band of scholars and leaders as we seek to be a persuasive, prophetic witness engaging the academy and equipping the church,” Moore said.

As a fellow, Prior will work with the institute to produce articles impacting both Christian and secular readers, hitting on key topics including marriage and family, cultural engagement, pro-life ethics, and aesthetics. She will also attend the ERLC conference in Nashville in October.

“My appointment reflects well on Liberty University and is an indication, I think, of the maturity of our institution and the increasing respect it is garnering from church leaders and Christian thinkers,” Prior said.