Leading Christian apologist speaks on the resurrection of Christ 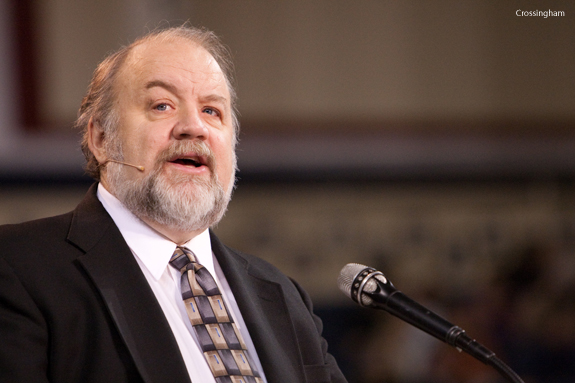 Dr. Gary Habermas, Distinguished Research Professor and Chair in the School of Religion’s Department of Philosophy and Theology at Liberty University, delivered the convocation message Monday in the Vines Center.

Habermas, a highly regarded Christian apologist, has written more than 35 books and has lectured all over the country and the world.

Despite being raised in a Christian home, Habermas said he struggled for more than 10 years with serious doubts about Christianity. He spent years of his life studying religious and non-religious systems alike seeking to discern what claims — if any — could be substantiated.

During this time, he developed a fascination with the resurrection of Christ. His study on this subject confirmed the truth of Christianity in his mind and his interest in the resurrection has never lessened, he said.

Habermas went on to explain the evidence that exists to prove that the resurrection of Christ is true.

He asserted that historians look for two very important things in manuscripts in order to validate information about history. First, the earlier the manuscript, the more reliable it is because it was written down closer to the actual occurrence of the event, he said. Second, they look for eyewitness accounts.

Habermas detailed the historical evidence, specifically from the letters of Paul, who wrote the earliest manuscripts on this subject and was an eyewitness to the resurrection.

Habermas then took the resurrection to a personal level.

He paraphrased 1 Corinthians 15:8 saying, “If Christ has not been raised, your loved ones who died in Christ died in vain.” Habermas recalled his wife dying of cancer at a young age and expresses how this verse was especially meaningful to him and his children at that time, comforting them in knowing that her death was not in vain.

Habermas quoted Paul at the end of 1 Corinthians 15 when he said, “Death where is your sting, grave where is your victory.” He said Paul was “taunting death,” and “trash-talking death.” He could only do this because of the resurrection of Christ, of which he was an early eyewitness, Habermas said.

“No other faith has anything like this,” he said. “ ... And it’s not just true, its applicable to our lives.”