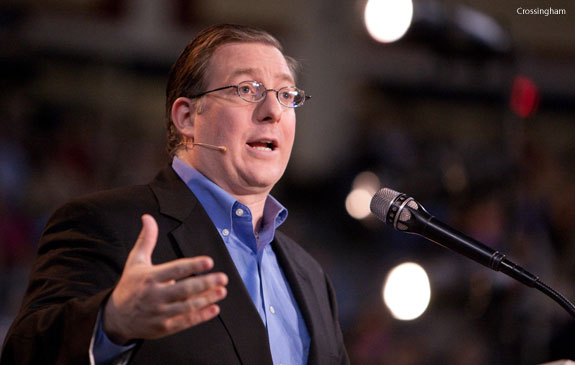 Chancellor Jerry Falwell, Jr., introduced Rosenberg, saying he was invited as part of a discussion on the support for Israel.

Rosenberg began by talking about his switch from a career in politics and business, working with influential leaders like Steve Forbes and former Israeli prime minister Benjamin Netanyahu, to writing political thrillers.

Rosenberg, an evangelical Christian, is the author of the New York Times best-selling novel, “The Last Jihad,” which was written nine months before 9/11 but begins with a hijacked jet and a kamikaze attack on an American city, leading to a war with Saddam Hussein over terrorism and weapons of mass destruction.

“I cannot tell you that I envisioned elements of that novel coming true — while it was being written, but that’s what happened,” he said.

As the eerily-familiar story climbed best-seller lists, Rosenberg said he kept praying that “the Lord would use this novel somehow to draw people into a conversation about Christ.”

Immediately after the book’s release in November 2002, he was caught up in a wave of media attention, with interviews on more than 160 radio and television programs in 60 days. He said people were not only intrigued by his seemingly prophetic tale of events, but also by the fact that he was Jewish but had characters in the book talking about Jesus.

Applause erupted when he told the students, “In that 60 days, the Lord gave us an opportunity to talk about our faith in Jesus Christ with more than 20 million people — based on the novel and the events that God had orchestrated to draw attention to it.”

He used this example from his own life to pose the question: “What is God preparing you for? What types of skills and gifts are you developing here at Liberty University that will prepare you for the moment for which God has placed you on this planet?”

“This is the place to prepare for the future,” he said. “You may have a season of failure in your life, but stay focused on Christ.”

Rosenburg also told the students that they were almost given the opportunity to hear Jalal Talabani, the president of Iraq, that day. He said an advisor to Talabani had called to ask him if he could find a large body of Christians for the president to speak to while Talabani was in the United States. Rosenburg then asked Liberty's Vice President of Executive Projects and Media Relations, Johnnie Moore, if Talabani could speak here, after which an official invitation was issued by Dr. Jerry Falwell, Jr.

Unfortunately, Talabani was unable to join Rosenburg as planned, due to knee surgery scheduled at the Mayo Clinic in Minnesota. Rosenburg has hopes that Talabani will still pursue an opportunity to speak at Liberty in the future.

Rosenberg went on to talk about the current events in the Middle East and how students should remain focused on what is being played out there, especially as it refers to Scripture.

“We’re at a moment when all the eyes of the world are increasingly riveted on Israel and her neighbors, the epicenter of the momentous events that are shaping our world and shaping our future,” he said. “This is a very critical moment ... and I know you’ve got a lot of other things going on in your lives, but you need to keep focused on the dramatic developments in our world as well as the prophetic moment that we’re in.”

Using Ezekiel 38 and 39, he spoke about prophetic prophecy of 2,500 years ago regarding the end times. Evidence here that these prophecies are about to be carried out isn’t conclusive, “but it’s curious,” Rosenburg said. Nevertheless, he explained that these prophecies can enlighten us about the situations we are facing today with Russia, Iran and other Middle-Eastern countries.

“If you only look at the world through political lenses or economic lenses, you cannot see in three dimensions,” he said. “Only if you look through the world also in what I call the third lens — the lens of Scripture — do things begin to be clearer. When you have a biblical perspective of the times that we live in, then what looks like danger, suddenly adjusts to opportunity—God is moving. He is not on a Disney cruise.”

Rosenburg emphasized the importance of the spread of the Christian faith in Iraq and throughout the Middle East and the changing hearts of some Muslims toward Christianity. He said the Christian Church should stand beside Israel, and that we should all be individually prepared for the end times.

“This is the moment for the Church,” he said. “The people who should go through the fiery furnace with her [Israel] ought to be followers of Christ.”

Rosenberg's latest project is “Inside the Revolution,” a book and film documentary that gives a biblically informed view of the current events in the Middle East. Liberty students got a chance to view a trailer to the film, which includes profiles of those who are shaping the Muslim world today.

In addition to “The Last Jihad,” Rosenberg has written three other novels in the series: "The Last Days,” “The Ezekiel Option” and “The Copper Scroll.” He is also the author of the non-fiction book, “Epicenter: How the Current Rumblings in the Middle East Will Change Your World.”

Rosenberg is also the founder and president of The Joshua Fund, a nonprofit charitable and educational organization that provides humanitarian relief for victims of war and terrorism in Israel and the Muslim world.