Students participate in See You At The Pole — a day early 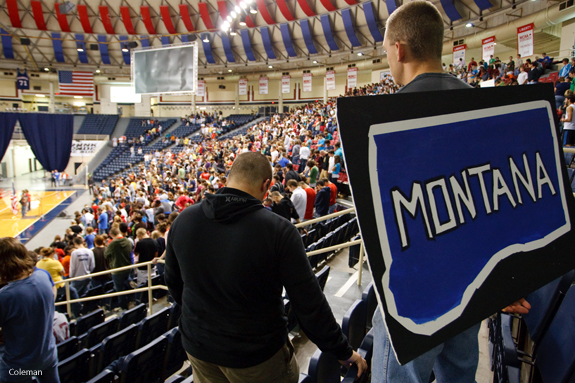 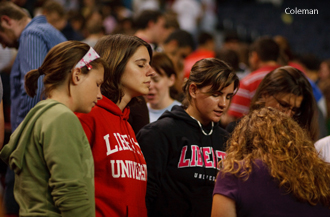 Nearly 3,000 Liberty University students gathered in the Vines Center on Tuesday, Sept. 22, for the annual See You At The Pole (SYATP) rally to pray for their schools, their leaders and their nation.

Hundreds of thousands of students gathered around their flagpoles on school campuses around the country on Wednesday, Sept. 23, marking 20 years for the student-led movement, which began in Burleson, Texas.

Liberty maintained its tradition of holding its own event the day before to make it easier for students to attend classes on time, said Campus Pastor Michael Miller. It also gives them a chance to pray those who will be gathering the next day, he said.

“It is a public time to pray for LU, our impact and the nation as well. … We do SYATP here at Liberty as a support to all of the connections our students have to their home schools, specifically high schools,” Miller said. “It is a way (for students) to recognize their connections with friends, teachers, coaches back home who must stand for Christ daily.”

Liberty students from every state and from China, Africa, Brazil, Mexico, Australia and Europe came to pray. Some bowed their heads and closed their eyes, some stared ahead and raised their hands, yet every student remained united under one cause. America’s government, Liberty’s administration, staff and the U.S. Armed Forces were some of the topics prayed on in unison.

“People keep telling me that this is so creative,” said Campus Pastor Dwayne Carson. “We don’t just have a quick prayer over one or two things. We are praying over the multitude of different aspects of this university.”

Some people were brought to the front to stand and represent each group as prayers were led for them.

“My wife (Becki Falwell) was so moved by all these kids here voluntarily praying that it brought her to tears when they brought us down to pray for us (Liberty’s administration),” Chancellor Jerry Falwell, Jr. said. “It is so encouraging to see young people like this, it gives you new hope for the future of the country.”

Carson, who also serves as Liberty’s Vice President of Spiritual Development, said the event shows that Liberty’s focus is where it should be.

“This is a place that believes in the power of prayer,” he said. “We are saying to our heavenly Father that we seek His face. The hope for this campus and the hope for this country and world is God. We need Him to come through for us.”