Three Liberty University School of Nursing (LUSON) students recently put the skills they’re learning to use in an unforeseen, but divinely orchestrated way at the scene of a car crash.

Driving through rain on a rural road after a Sunday trip to Natural Bridge, Va., earlier this month, junior Gabby Cain rounded a corner and came onto the scene of a car accident that occurred only a moment earlier. One car had come to a stop perpendicular to the road and the other was in a ditch on the side of the road. Two people were sitting on the ground, and a man was standing, still in shock, with blood running down his face.

“The first thing I did was pull over, and I had a clinical that morning, so I still had my nursing bag with me with my pen light, stethoscope, and everything else,” Cain said. “I knew there were going to be injuries, but I didn’t know the extent of it. I’ve always been the type of person who wants to run to help whenever I see something wrong.”

As Cain helped the man lie down to stabilize his head and neck in case of injury to his spinal cord or brain, her friends and fellow LUSON juniors Ella Miranda and Tyler Wilson arrived in another car and ran to join her. Wilson, a trained EMT, took charge and started doing neurological assessment on the man while Miranda checked his pulse and legs. The man was responsive while still in shock; the other two people involved in the accident had lesser injuries, so the students focused on him while they waited for paramedics to arrive.

“I was really nervous that he wasn’t going to be OK,” Miranda said. “Since the EMTs were 30-45 minutes away, if he did have a spinal cord injury or brain bleed or something, all we could have done was stay with him and try to help. It could have been a lot worse, but thankfully it never was.”

“The EMTs were very appreciative of what we did and told us, ‘Thank you so much for being here and doing what you could, it doesn’t go unnoticed,’” Cain added. “I heard that and just thought to myself, ‘This really is my calling; this is where I belong.’”

The students were recognized for their actions this week during the School of Nursing’s all-faculty meeting, where they were presented with special honor coins as part of a monthly tradition highlighting students who have exhibited outstanding acts of service.

Also receiving the recognition was junior Courtney Myer, whose medical training proved beneficial in a way that was closer to home. Last fall, Myer asked her father to be her test patient for a class assignment in which she had to perform a cardiovascular assessment. She already knew he had a heart murmur, so she thought it would be helpful to practice on him, with an existing medical condition to monitor. In conducting the assessment, however, she heard more than expected.

“I started with his lungs and heard the murmur in the lateral lung fields, and then I went more in depth and found that he had pulsation in his neck, and I knew that was a really bad sign,” Myer said. “I told him about it and said he should get it checked out.”

Taking her advice, he met with a doctor and was told that his daughter had actually alerted them to the signs of an aortic valve stenosis and a potentially life-threatening ascending aortic aneurysm. He had a successful surgery to replace his heart valve in January and has recovered well.

“The surgeon told him that if he hadn’t gotten this checked out when he did, he could have not woken up on any day,” Myer said. “It was definitely a God thing.”

“LUSON is blessed with students who demonstrate Kingdom living every day,” Interim Dean Dr. Tracey Turner said. “Using the fundamental skill of assessment, they showed God’s love in helping those in need, serving others as they serve God.” 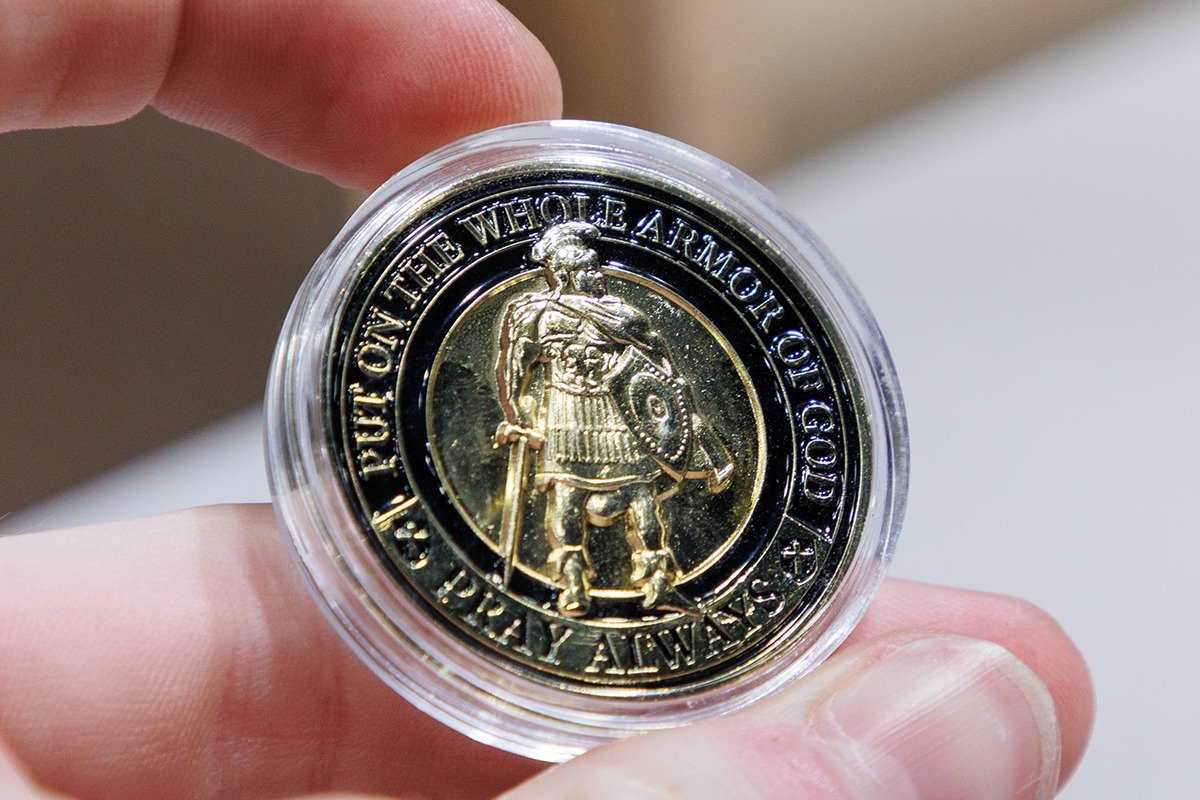 Professor Dr. Jerry Harvey started the coin tradition, deriving the idea from his time serving in the U.S. military. Upon retiring in 2007 from the Air Force and based at the Pentagon, Harvey purchased coins bearing the image of a soldier and the words “Armor of God” to give to his future students when he saw them perform outstanding acts of service. After five years of doing this on his own, Harvey collaborated with the dean at the time, Dr. Deanna Britt, to make the practice into an official LUSON custom in 2012.

“Any time we find a nursing student doing something noteworthy or something we would recognize as building the body of Christ, we give them a coin,” Harvey said. “On any given month, we give two to three coins out, and we’ve gotten to the point where we order (hundreds) at a time.”

The students were humbly appreciative of the recognition.

“It’s an honor, and I’m definitely going to remember this forever,” Miranda said. “We were just there and did what we could.”

“I didn’t know what to expect, but it really was an honor to be in front of everyone, including my past and present professors,” Myer added.

“I’m going to hold on to this (coin) for a long time,” Wilson said.