As classes kicked off for the 2019-20 school year at Liberty University on Monday, students were met with some new improvements to their campus. Over the summer, Liberty renovated and upgraded facilities, announced new dining options, and worked on current and future construction projects.

Along with the new upgrades are new faces. Liberty’s incoming class is one of the highest in school history, with freshman and transfer enrollment peaking to almost 4,500 for the fall semester (3,678 freshman, 794 transfers). They combine with a sea of nearly 15,000 residential students.

Whether you’re a new student excited for the LU experience, a returning student nearing the horizon of another semester, or someone who may be checking out our campus for the first time, read below to discover some of the recent campus upgrades. 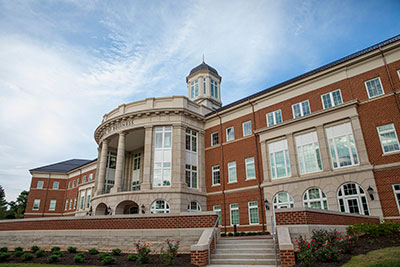 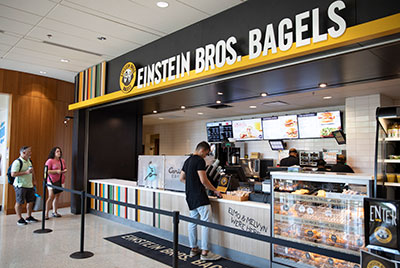 Students will find a new meal option on campus, tucked between Pizza Hut and Auntie Anne’s on the bottom floor of the Jerry Falwell Library: Einstein’s Bros. Bagels. The national chain, commonly positioned in airports and malls, specializes in breakfast foods, serving a wide variety of coffees, including Caribou Coffee, croissants, and bagels.

Students also have two new eateries to try in the Tilley Student Center in Green Hall (replacing Tres Habaneros and Bella Trattoria): the Latin-inspired Fuego and Umai, featuring Asian cuisine. At The Food Court at Reber-Thomas, Liberty’s main dining hall, students will enjoy Bistro ’71, which has been moved from David’s Place. It will feature the same menu of deli sandwiches and flatbreads. The dining hall will also introduce a more diversified global station with foods from countries that were not featured before. 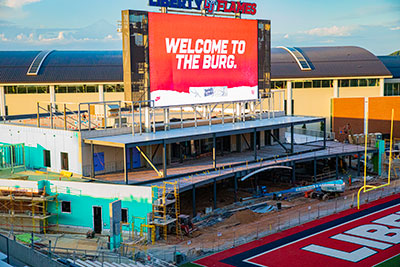 Following Liberty’s first season as an FBS program, a $25 million renovation project was started at the Liberty Football Center, located at the north end of Williams Stadium. Work continued this summer to expand the building by an additional 18,000 square feet with a new-and-improved 122-player locker room, training and nutrition centers, and a theater-style team meeting room. Although completion is scheduled for January 2020, the locker room and training facility will be functionable by the first home game, when Liberty plays Syracuse University on Aug. 31. The game will mark the first time Liberty has hosted a Power 5 opponent.

Fans will see a full revamp of the concessions at Williams Stadium. Sabrosos, which will serve street tacos, and Yardbird, a southern-style chicken eatery, are two national chains that will be present at each home match. Auntie Anne’s and Dunkin’ Donuts will also have their own stations on both sides on the concourse, and Domino’s will continue operation from its usual stand. Williams Stadium will feature new mobile snack cart kiosks around the arena, which will help reduce long lines at concessions and can be utilized at any arena around campus.

Formerly in The Food Court at Reber-Thomas, the Training Table has been moved to the second floor of Carter Tower. This location will be able to better tailor food offerings for our athletic programs so that our athletes remain refueled and refreshed on and off the field. 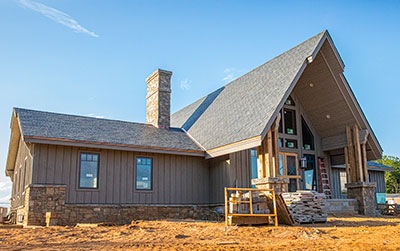 The 5,000-square-foot lodge is scheduled to open this fall to offer gun storage, an armory, awards station, and a team room for Liberty’s collegiate shooting sports. The facility will complement Liberty’s Olympic-style shooting varieties, which include multiple gun ranges, a super sporting clay station, and a bunker trap.It is expected it to open around Labor Day. 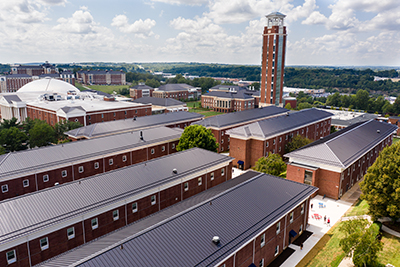 As one of the housing options located at the heart of campus, the Hill received substantial renovations and improvements throughout the summer, including new roofing, floors, and fresh paint for the rooms and hallways. The area’s water pressure has also been improved and the community bathrooms received new countertops with additional outlets. Plans for a lawn area are in progress, expected to be ready by the end of September. 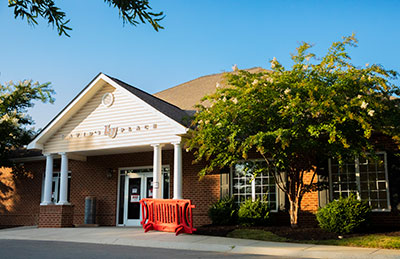 A recreation venue that has long featured billiards, table tennis, and gaming, is currently being converted into a fitness facility offering equipment for cardio and strength training as well as a cycle studio and multipurpose studio. The heated outdoor pool will remain in operation. The facility is scheduled to reopen in September. Students are encouraged to use the Montview Game Room, on the second floor of the Montview Student Union, as the main site for billiards and gaming. 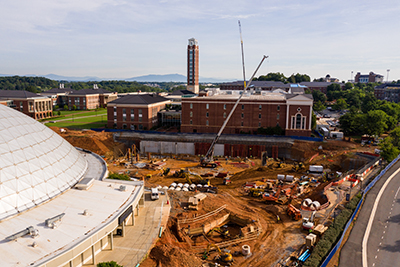 Progress continued this past summer on a new 125,000-square-foot sports arena next to the Vines Center. The arena will host women’s volleyball games and men’s and women’s basketball games as well as function as the permanent operations facility for the indoor volleyball program. Along with the 4,000-seat stadium, Liberty Arena will include expanded office and locker room space. The opening date is scheduled for Fall 2020. 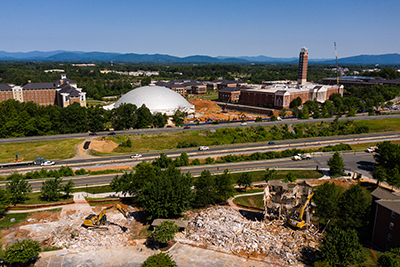 With two residence halls on East Campus demolished at the beginning of the summer, ground has now been broken for the new parking garage expected to open by August 2020. It will span nine floors with 2,000 parking spaces.