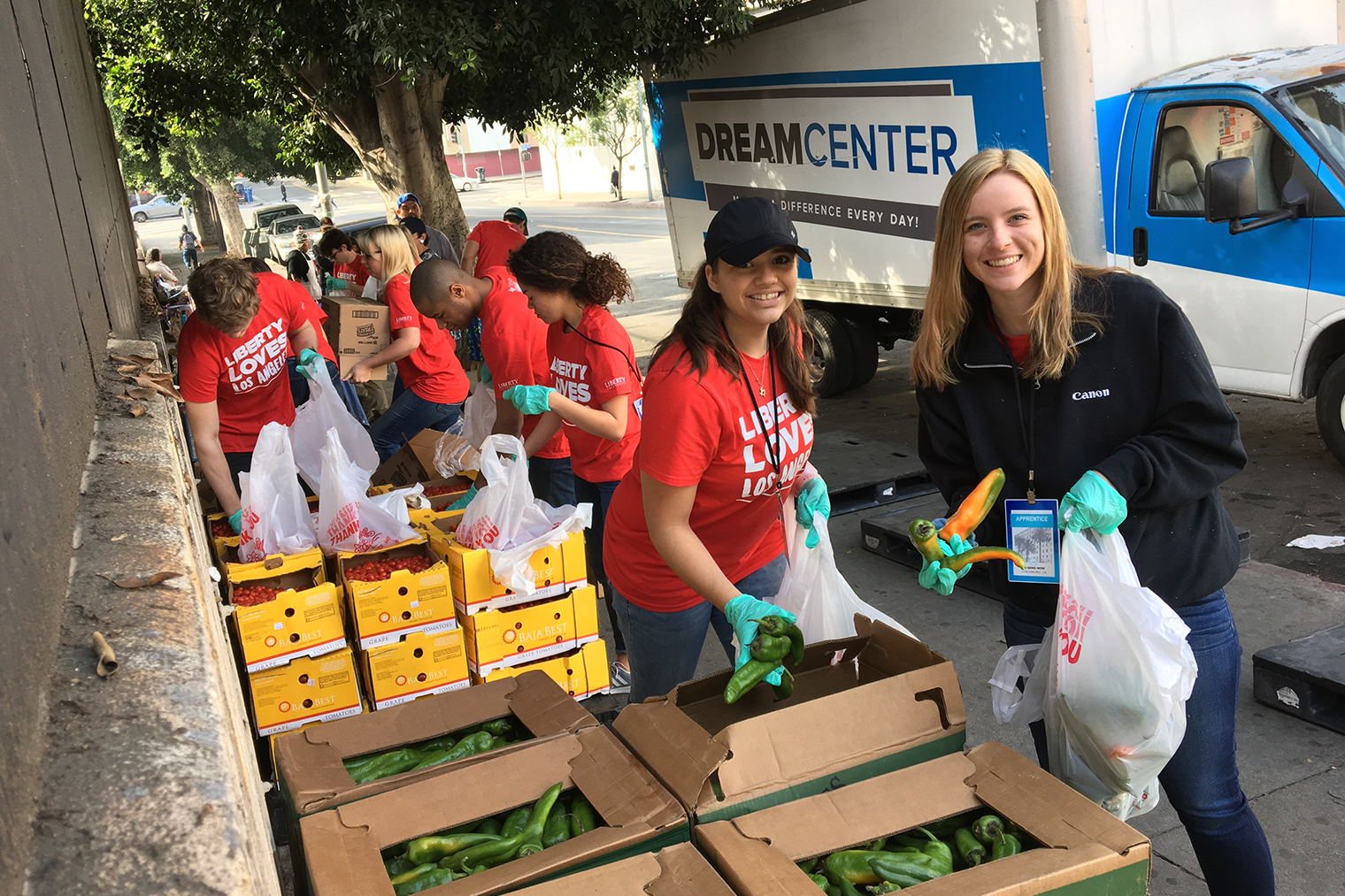 A team of 10 Liberty University students and two staff members spent the week before the start of spring semester serving in some of the most at-risk communities of Los Angeles.

The trip was part of LU Send Now. Over Christmas break, a call was put out to students to partner with the Dream Center, a faith-based charitable organization located in LA’s Echo Park neighborhood, as an opportunity to serve the people of California.

“The spirit of LU Send Now is ultimately about simply being available to serve communities and love people,” Vice President of Spiritual Development Josh Rutledge said. “The Dream Center afforded us that chance to go into these communities and serve individuals and families.”

The Dream Center was started in 1995 as an outreach to the City of Angels’ tougher areas. According to Rutledge, the center provides food, clothing, and resources to people who are recovering from homelessness, addiction, abuse, and other challenges. The ministry also has a one- to three-year residency program for men and women to help them get back on their feet.

While there, Liberty’s team participated in several community outreach projects, including one in Skid Row, the infamous Los Angeles neighborhood known for its poverty and high crime rates.

“The only way I can describe it is life-changing,” senior Sierra Campbell said. “The experience left me without words, to see how broken the city and the community is.”

Campbell said it’s easy to associate LA with Beverly Hills, beauty, and wealth. However, the experience left Campbell with a desire to reach out to at-risk communities.

“This trip was a chance to be the hands and feet of Christ,” she said. “There are so many communities, not just internationally but in the United States, that need help. Coming back to Lynchburg, I want that to stick with me.”

As a nursing major, Campbell said she appreciated being able to serve people in a different way.

“Although I wasn’t administering first aid or ministering to people at their bedside, it was an awesome way to experience a different type of outreach,” she said.

Junior Celia Frattarelli said the group had a chance to minister to about 100 children in several neighborhoods by sharing the Gospel, playing pick-up games of soccer and basketball, and helping with crafts.

“I’m an early childhood education major, so being able to interact with kids was my favorite part,” Frattarelli said. “The event we hosted was called Kidz Jam, and it was a great way for the kids to hang out in a safe area and know they are loved.”

Frattarelli described the experience at Skid Row as eye-opening.

“I’m still processing it,” she said. “We were able to hear some people’s stories and just witness the brokenness of the neighborhood.”

Frattarelli said the trip made her realize that although she may not be able to change the world all at once, she can make an impact by continuing to be intentional in reaching out to others, no matter where she is.

“I don’t have to go to a different country to make an impact,” she said. “Even here in the Lynchburg, there are people who need to be reached.”

After her experience in California, senior Hannah Ginion encourages others to seek out opportunities to go on trips, whether it’s through LU Send Now or other Liberty outreach opportunities.

“These trips are a chance to serve in ways that might not have been possible with a college budget or schedule,” she said. “I had such an amazing time on my trip, and it was a great time for me to get away, meet new people, serve others, and grow in my relationship with Christ by evangelizing to others.”