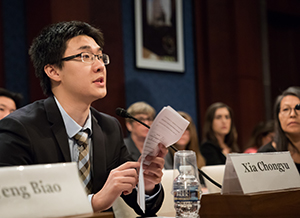 Sitting in front of a microphone in a room on Capitol Hill Wednesday afternoon, Xia Chongyu said he was still surprised to find himself at a hearing for the Congressional-Executive Commission on China, headed by U.S. Sen. Marco Rubio (R-Fla.) and U.S. Rep Christopher Smith (R-N.J.). Moments before it began, he admitted that he was a bit nervous, but the rising junior at Liberty University was well prepared to give one of the most important presentations of his life.

Chongyu was one of four witnesses at the hearing, titled “Gagging the Lawyers: China’s Crackdown on Human Rights Lawyers and Its Implications for U.S.-China Relations.” His father, Xia Lin, is a human rights lawyer serving a 10-year prison sentence in China. Chongyu told his family’s story, testifying that his father’s detainment was based on false charges and recounting the unjust mental and physical torture his father has endured.

According to the commission, the tale of Chongyu’s father is one of many. “Over the past four years, the Chinese government has carried out an extensive campaign to silence political dissent, curtail civil society, and ensure ideological loyalty to the Chinese Communist Party from various sectors of society, including business leaders, bloggers and social media users, university professors, and journalists,” the commission stated in its hearing announcement. “One of the most vicious aspects of the campaign has been the use of detentions, arrests, torture, televised confessions, and enforced disappearances to punish lawyers and legal advocates who have defended various victims of the Chinese government’s human rights abuses, including religious adherents, petitioners, artists, and reporters.” A nationwide crackdown started in China on July 9, 2015, in which “over 300 human rights lawyers, legal professionals, and human rights advocates were detained, summoned for questioning, or disappeared.” 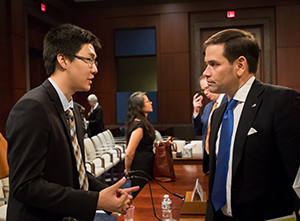 Chongyu spoke about the events of Nov. 8, 2014, when he said his father — who “dedicates himself to be a voice for the voiceless” — was abducted by secret agents and was imprisoned for fraud “without proper evidence.” Chongyu said that when his father was being led away, the agents did not question him about the suspected fraud, but about the clients he represented. “After 600 days of imprisonment and torture, on June 17, 2016, he was finally tried in the Second People's Court of Beijing but was denied a personal statement in court,” Chongyu wrote in a petition letter to the Chinese Embassy. In April, the court delivered a final sentence of 10 years imprisonment. Chongyu said that the court rejected the evidence presented by his father's attorneys that showed he did not commit fraud, denying him a fair trial.

“I refused to accept this illegal and unjust verdict,” he testified at the hearing. “In April, I presented my petition at a Convocation at Liberty University, and the response was overwhelming.” He said he delivered the petition, with 14,000 signatures at the time, to the Chinese Embassy, “but no one would even see me — before I left I read the petition aloud at the gate of the embassy.”

Since then, Chongyu said he has collected “over 94,000 signatures — most are from Americans, some from countries around the world. I’m not alone.”

In closing, he pleaded with the commission to join his cause.

“Human rights lawyers are the cornerstone of society. I hope the U.S. government can increase its involvement in such cases in the future. Moreover, I wish the Congress of America could urge the Chinese government to stop controlling the judiciary system and stop the persecution against human rights lawyers.” He asked for the U.S. to take a clear stance and “communicate that human rights violations will not be tolerated.”

Both Smith and Rubio honored Chongyu and thanked him for being bold in his testimony. In their statements and introductions, they carefully pointed out that any reprisals that Chongyu and his family may face because of his testimony would be taken seriously as a direct attack against the commission’s work. 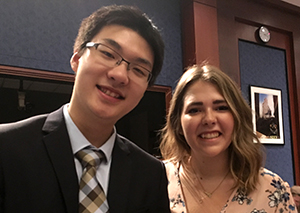 Another Liberty student played a special role in the hearing, even though she was never at the microphone like her classmate. Last semester, Jannah Schloeder, a rising junior, heard Chongyu’s story in Convocation, and she knew she wanted to help. She contacted her mother, who works for Rep. Smith’s office. It wasn’t long before Chongyu was asked to speak at the Capitol. But the two students had never met – until the hearing on Wednesday, when Schloeder traveled from New Jersey to Washington, D.C., to show support for her new friend.

Chongyu is studying public health at Liberty. View the webcast of the hearing on the commission’s YouTube channel and read more about his fight for his father’s freedom in the Liberty Champion. 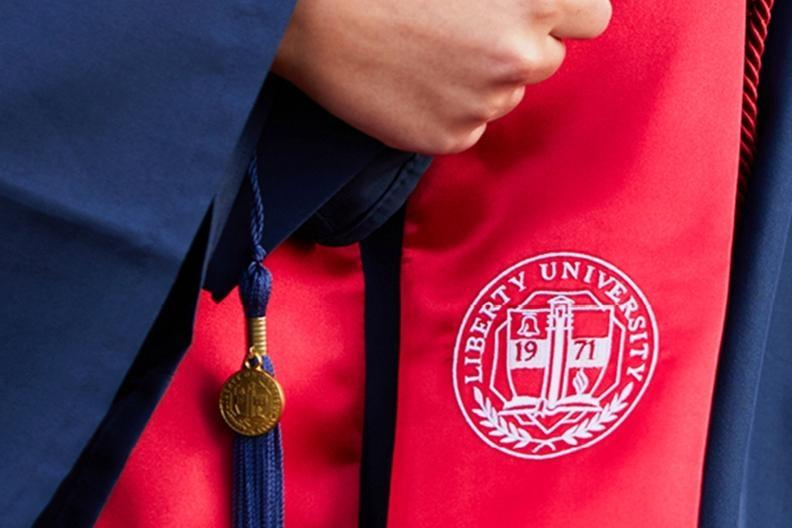 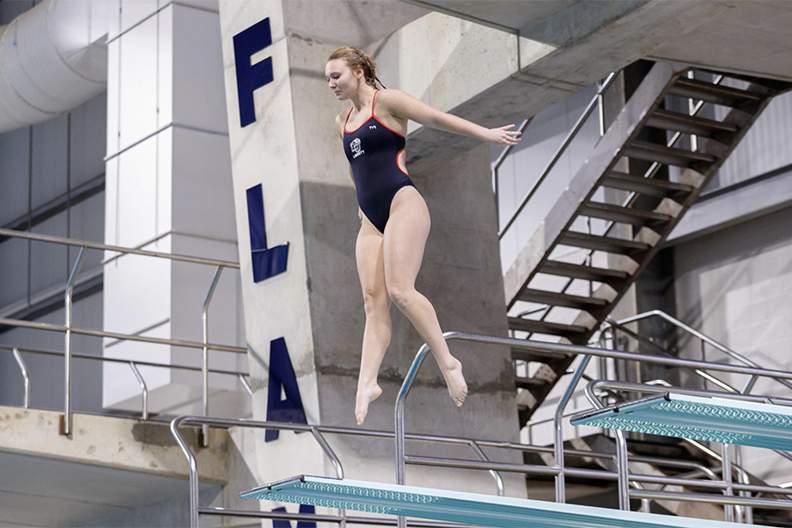 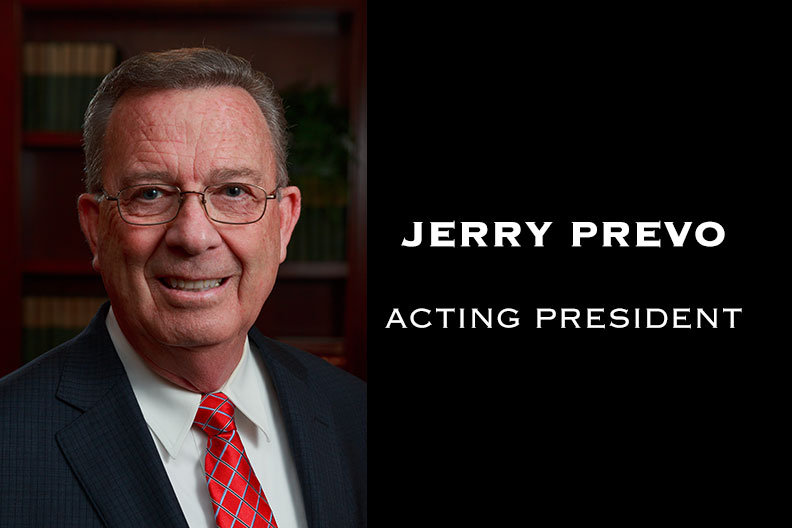