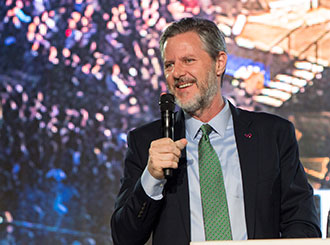 President Jerry Falwell kept the mood light by sharing humorous stories from his time as a Liberty student. He also thanked the student body and faculty for their commitment to Liberty, which has led to a community of academic excellence as evidenced in the Carnegie Foundation’s recent reclassification of Liberty as a doctoral university. Liberty’s Provost Dr. Ronald Hawkins introduced the students to this year’s winners of the President’s Awards for Excellence in Teaching, and thanked the recipients for their dedication in the classroom.

Students also heard from former congressman and popular conservative talk radio host Joe Walsh, who charged the young crowd to continuously fight for the freedoms they enjoy as Americans.

After being reminded that Liberty has been blessed in recent years with an on-campus voting precinct, making it easier for students to be civilly engaged, the crowd got a chance to hear from each of the candidates for Lynchburg City Council Ward III (the district in which Liberty lies): Charleta Mason, Albert Billingsley, and incumbent Jeff Helgeson.