The most recent book by Dr. Karen Swallow Prior, a professor in Liberty University’s Department of English & Modern Languages, has made Christianity Today’s 2015 Book Awards List. “Fierce Convictions: The Extraordinary Life of Hannah More — Poet, Reformer, Abolitionist,” is the top pick in the Her.meneutics category, which focuses on the perspectives of evangelical women. The list is selected by CT’s editors and is comprised of 23 books that are sure to “shape evangelical life, thought, and culture.”

Published by Thomas Nelson, “Fierce Convictions” is the biography of a woman writer who fought to end the slave trade, promote literacy, and reform British society. It includes a foreword by best-selling author Eric Metaxas, who was Liberty’s 2014 Baccalaureate speaker.

According to author Michelle Van Loon, “‘Fierce Convictions’ offers a compelling portrait of a woman committed to love God with her heart, soul, mind, and strength — a woman who changed the world around her. This is not a one-dimensional hagiography of Hannah More; her struggles are included alongside her laudable accomplishments in the arts, educational reform, and the abolition of slavery in 18th-century England.” 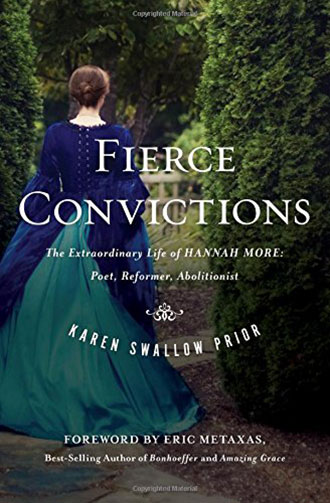 Prior is a contributing writer for a number of publications, including The Atlantic, In Touch, and Think Christian. She is a member of the Faith Advisory Council of the Humane Society of the United States and was recently named a Research Fellow at the new Research Institute by the Southern Baptist Convention’s Ethics and Religious Liberty Commission (ERLC).

Prior is a member of Liberty’s graduate faculty and primarily teaches British literature. In 2013, she received the Chancellor’s Award for Teaching Excellence.

“Fierce Convictions”​ is available in bookstores and at Amazon.com.