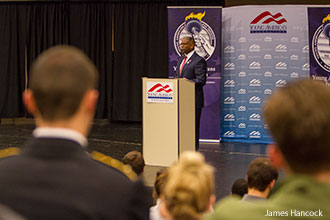 Former member of the House of Representatives and retired U.S. Army Lieutenant Colonel Allen West visited Liberty University on Tuesday, Nov. 18, and challenged students to become Champions for Christ and their country.

The event was organized by Liberty University’s Young Americans for Freedom (YAF) club, which was founded last spring as a project of Young America’s Foundation, an organization that provides students with conferences, seminars, educational materials, internships, and speakers from the conservative movement. The foundation assisted Liberty’s club in coordinating West’s visit.

West’s 22-year military career included service in several combat zones, including Operation Desert Storm, Operation Iraqi Freedom, and later in Afghanistan. He received the Bronze Star, three Meritorious Service Medals, three Commendation Medals, and a Valorous Unit Award. He was elected to the United States Congress representing Florida’s 22nd District from 2011-2013. As a member of the 112th Congress, West sat on the Small Business and Armed Services Committees and was vital to the passage of the 2012 National Defense Authorization Act. West is also a Fox News contributor, a Senior Fellow at the London Center for Policy Research, and has co-authored several books. He is CEO of the National Center for Policy Analysis, a nonprofit, nonpartisan public policy think tank. 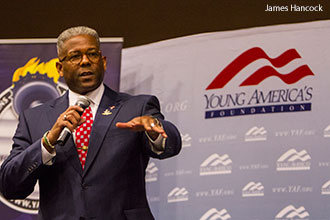 In his speech, he urged students to practice competence, courage, boldness, perseverance, assurance, and confidence as they exercise their faith.

“If we don’t continue to understand that connectivity between being a Christian and being an American, I think we are going to lose this great blessing of liberty,” West said.

West used several historical and biblical examples, boldly challenging the audience to show strong values in the midst of a fallen world. He explained the need to be competent by discussing current debates over the separation of church and state that originated from a letter written by Thomas Jefferson. West revealed that Jefferson never intended for the letter to restrict practices such as prayer. West urged students to stand by the Bible and the U.S. Constitution and not be swayed by controversy.

“If you’re not competent, if you turn away and do not meditate on these things day and night … then you’re not going to be prepared to go out and be true Champions for Christ and country,” West said.

West reminded students that they must be courageous and bold in a world that openly persecutes Christians. He said the Christian faith continues on in the hearts of believers despite persecution.

“Think about where you are right now, freedom leaders, being trained as a champion at a university called Liberty, and that happened because somebody in 1971 had a bold vision,” West said. “You must be bold to proclaim it, just the same as the person was bold to establish it.”

Lastly, students were told they can have assurance and confidence through God’s established promises.

“You are more than a conqueror,” West said. “You have the assurance that if you step out there (then) there is nothing that will be able to stand up against you.”

West ended the night with a question-and-answer session that included subjects such as how the country should respond to ISIS, issues in the Middle East, and what his plans are for the 2016 presidential election. Although named by some political analysts as a potential presidential candidate, West said he is content with his current CEO position and is trusting God to lead him and is waiting for His timing.

After West’s speech, YAF hosted a private dinner with him and the 350 YAF members.

West’s visit was the fifth event sponsored by YAF this semester. Other events included a 9/11 memorial, a mock Berlin Wall, Constitution Day, and Freedom Week.

“We’re trying to remind students that you can have all these rights, but unless you have responsibilities, the rights mean nothing,” said Ben Solem, YAF vice president.

“I think a lot of students believe in a conservative cause,” Solem continued, “but they don’t really know where to go with that. We’re trying to get people involved, to just be an activist, to go up and partake in what we’re doing. We hope students realize that we are champions for this country and if we don’t stand up, who will?”