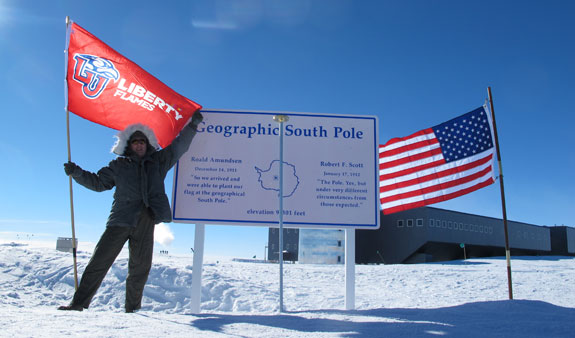 Panzera, a pilot on active duty with the U.S. Air Force’s 109th Airlift Wing, made the excursion with a Liberty flag in tow on what could possibly be his last deployment to Antarctica after flying there for 17 years.

“I wanted to honor the school by taking a university flag to a place that Liberty has never sent a representative to — the South Pole,” Panzera said. The flag was flown at McMurdo Station and the Amundsen-Scott South Pole Station.

Panzera’s son, Jonathon, is a freshman at Liberty. With his son in mind, David Panzera said his desire was to acknowledge Liberty’s success as a university that seeks to produce Champions for Christ in every profession.

“For me as a parent, I’m extraordinarily happy that my son is in a Christ-centered environment,” Panzera said. “They (Liberty) really does focus on a life of Christian service — a life of being a Christian first and then in another area second.”

After visiting campus for his son’s orientation in Fall 2013, David Panzera said he felt compelled to bring Liberty’s name to the remote area, and requested a Liberty flag to take with him on his trip.

“There is no other place like Antarctica,” he said. “The few people who get to see it are there for the purposes of exploration and furtherance of our scientific knowledge for the benefit of all. In the many years I have spent flying over the continent, I have come to the conclusion that the God of all creation has so much more for us to discover and enjoy. There are sights that never grow old to me and beauty that can only be here by the hand of a most amazing Creator.”

Panzera has served 25 years with the U.S. Air Force. He said two other members of his unit are proud Liberty parents as well.

He recently sent the flag back to Liberty along with a marker designating that it was flown at the South Pole. He also sent a crystal from Mount Erebus, the largest active volcano in Antarctica, for the university’s science departments.

“I enjoyed taking Liberty’s flag there,” David Panzera said. “I was blessed to have done so for such an awesome university.”