McClintock named among top 15 DNA analysis professors in the country 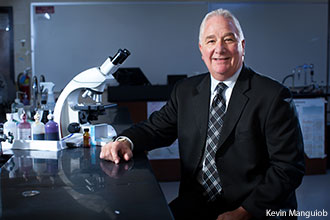 Dr. J. Thomas McClintock, a professor of biology in Liberty University’s Department of Biology & Chemistry, was recently named among the top 15 DNA analysis professors in the country by ForensicsColleges.com, a leading website on forensics programs across the nation.

“Dr. McClintock has been a fantastic addition to the department,” said Dr. David DeWitt, chair of Liberty’s Department of Biology & Chemistry. “The wealth of expertise that he has in the area of DNA analysis is a tremendous benefit to our students. He has already worked with the criminal justice department in regards to sample collection from crime scenes. I am looking forward to some possible new courses in the area of forensics and DNA analysis that Dr. McClintock would be involved in.”

Criteria for the selection of these professors included practical experience outside the academic setting, involvement in cutting-edge research, and being published in academic journals.

Among his many notable accomplishments, McClintock founded DNA Diagnostics, Inc. in 1993, which provides expert DNA advice in criminal and paternity cases. The company also gives seminars and workshops to investigators and law enforcement officials on topics such as presenting DNA evidence in the courtroom, and handling and analyzing evidence. DNA Diagnostics has provided services for nearly 300 cases in 18 states, three Canadian territories, and three European countries.

McClintock has taught with Liberty University Online since 2011 and is teaching residentially at Liberty for the first time this semester.