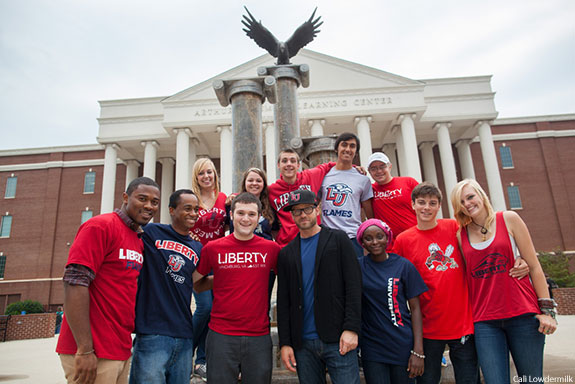 McKeehan came to the university to record promotional materials (both audio and video) for Liberty, which is the primary sponsor of his upcoming Hits Deep Tour, Nov. 7-Dec. 15. He visited Victory FM, a broadcast service of Liberty, as well as Williams Stadium, Arthur S. DeMoss Learning Center, Hancock Welcome Center, and several other campus locations.

“It’s an honor for me,” McKeehan said of the partnership with his alma mater. “Liberty is a school that definitely was pivotal in my life … it offered me a foundation for my spiritual life and for some of my friends that I have done my whole life with. It’s nice to get that opportunity to tip my hat to something that played such a massive role in my life.”

As McKeehan explored campus, he took time to speak with several students, including some members of the Lady Flames Lacrosse Team, snapping pictures and sharing stories about life at Liberty.

He had a chance to watch Liberty Men’s Soccer practice, coached by his longtime friend Jeff Alder, and visited the LaHaye Student Union to see SOAR Dunk perform their acrobatic basketball show. McKeehan was even given the opportunity to test out his own aerial hoop skills.

“SOAR Dunk killed it. … It was nice to see the fellas doing what they do as a recruiting tool. That athleticism, those dudes are amazing,” McKeehan said. “I got to dunk a basketball off a mini trampoline — they were doing flips and stuff like that — I just got to straight up dunk. I’m not used to soaring like that, I need to work on my hops.”

The Hits Deep Tour features 19 shows and kicks off Nov. 7 in Huntington, W.Va. Brandon Heath, Mandisa, Jamie Grace, Colton Dixon, Chris August, and Capital Kings are also in the tour lineup. Liberty will send members of its recruitment team on the road to man an informational booth and give presentations on stage that will include prizes and giveaways (an iPad will be among the prizes each night).