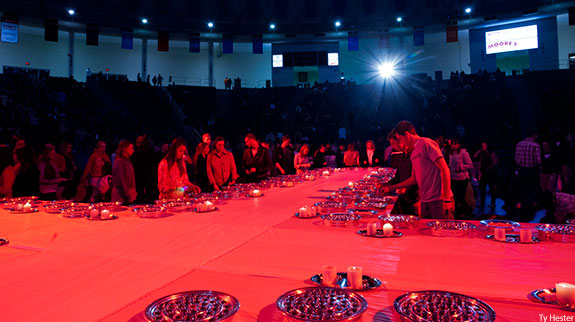 Liberty University students were among the first to view never-before-aired clips from the popular cable TV miniseries “The Bible” on Wednesday night during the school’s annual Easter Communion service in the Vines Center.

The show, airing on the History Channel and created by reality show producer Mark Burnett ("Survivor," "The Voice") and his wife, actress Roma Downey (“Touched By an Angel”), is cable’s most-watched entertainment program of the year. The 10-hour docudrama concludes on Easter Sunday.

Clips depicting the first communion with Jesus and the Pentecost were shown during a time of worship led by the Liberty Campus Band.

Senior Sheila Whitcomb said viewing the clips was a unique opportunity during a time of remembrance.

“It was really cool to watch the clips from ‘The Bible’ and to see it come to life and visualize it. It brought a deeper understanding to communion and was really meaningful.”

Hundreds of students gathered for the service, a special part of Liberty’s spiritual programs. It was held during the regularly scheduled Campus Church time. A cross-shaped structure in the middle of the floor held the elements, and after all the students took communion, the lighting on the cross turned from red to purple, symbolic of Christ’s royalty and resurrection. 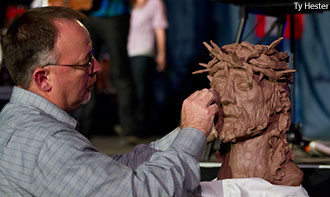 During the service, Todd Smith, chair of Liberty’s Department of Studio and Digital Arts, sculpted a clay figure of Jesus as he might have looked on the day of the crucifixion.

Campus pastor Johnnie Moore said worship can involve everyone’s diverse gifts and talents for God's glory, such as sculpting. He challenged students with a message about the significance of remembering Christ’s sacrifice on the cross.

“Communion is not about a ritual to be fulfilled, it’s about a heart to be examined,” he said. “Tonight in the hustle and bustle of this busy world, we are going to patiently examine our hearts, and together as a community, but as focused individuals, take the bread and drink the cup.” 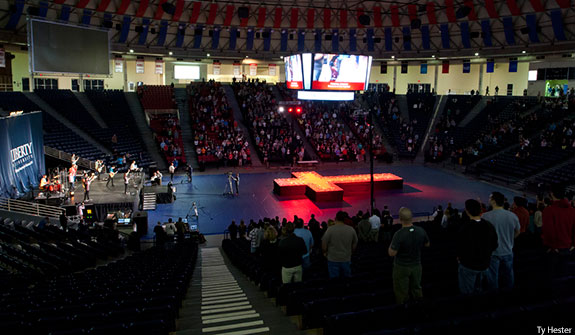